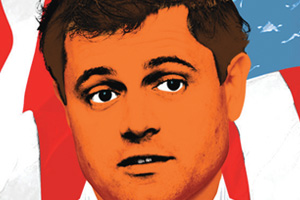 As he walks the quiet Main Street of Farmville, Virginia, Rep. Tom Perriello has his work cut out for him. Wearing khakis, brown boots, and an open-collar shirt in the 100-degree heat, the freshman Democrat pops into stores and offices—he’s not always recognized—and asks how business is going and what he can do to help. He tells his constituents that America needs to “make things,” and “the elites” in Washington don’t get this. At Key Office Supply, owner Jim Ailsworth thanks Perriello for his health care reform vote, noting that he plans to use the law’s small-business tax credit for his staff. At Davenport & Company, an independent stock brokerage, manager Brad Watson says he’s worried that the stimulus (which Perriello also supported) won’t yield long-lasting public works. Perriello points out that he argued “for a stimulus that is focused on 10 years—not 18 months.” After Perriello leaves, Watson points to campaign literature on his desk for state Sen. Robert Hurt, who vanquished several tea party candidates to become Perriello’s Republican challenger. “Hurt’s a nice, moderate Republican,” Watson says; he intends to vote for him.

Some 175 miles away in Washington, Republican strategists would be heartened to hear Watson talk. Defeating Perriello is one of the GOP’s top priorities as the party fights to gain the 39 seats it needs to seize control of the House and create an anti-Obama fire wall. These few sleepy blocks in central Virginia constitute one of the front lines in this fight. (Before the campaign even began, Perriello was already the target of $1 million in attack ads.) Given that political handicappers estimate the GOP is likely to bag at least 30 House seats, the Dems’ fate could depend on whether Perriello manages to hold on.

Virginia’s 5th Congressional District—a New Jersey-size triangle that combines liberal-leaning Charlottesville with stretches of rural and Bible Belt territory—was drawn by GOP legislators to be an easy win for a Republican. But in 2008, Perriello narrowly beat incumbent Virgil Goode Jr., a Democrat-turned-Republican, by 727 votes. Barack Obama’s presence on the ticket, which boosted African American turnout, probably helped (though John McCain handily won the district). But this year, Perriello, a Virginia native, Yale Law graduate, and former international human rights attorney, is on his own. He can count on Charlottesville, but he must secure some votes in the southern and rural regions to remain a congressman.

A short fellow with a compact build, Perriello, 35, strides past several empty storefronts before hitting The Bakery, where co-owner Synthia Starkey complains about how hard it is for small businesses to obtain credit and health insurance. She tells me, “I’m sick of being taken advantage of. Seems like big business runs this country.” She seems just right for Perriello’s populist pitch. Did she vote for him last time? No, she declares, explaining she’s from a conservative family. Then she reconsiders and says that she thinks she did vote for Perriello “to see what would happen.” Asked if he’s told her anything that will make it easier for her to decide between him and Hurt in the fall, she laughs and says no.

“I don’t see the dividing line as liberal versus conservative. It’s populist versus corporatist. If we’re not standing up to the most powerful interests, where is the Democratic Party?”

Later, racing through farmland in his white Ford pickup, Perriello explains why he thinks his brand of “conviction politics” can win over voters like Starkey: “I don’t see the dividing line as liberal versus conservative. It’s populist versus corporatist. If we’re not standing up to the most powerful interests, where is the Democratic Party?” Perriello acknowledges that some in the conservative district may judge him harshly based on his votes for health care, cap and trade, and the stimulus. (After a tea party blogger angry about “Obamacare” published the address of Perriello’s brother—believing it was the congressman’s home—someone cut the propane line to the gas grill.) But, Perriello notes, “I’ve been incredibly critical of [White House economic adviser] Lawrence Summers as someone who wouldn’t know anyone making less than six figures, unless that person was driving him around.” He often reminds constituents that he didn’t vote for continuing the bank bailout.

When a saleswoman at an appliance store tells him that her elderly customers often can’t afford the cost of replacement parts, Perriello replies, “We’re not producing anything anymore. The elites in both parties are too close to Wall Street. If jobs are created in India, that’s fine with them.” This is not a made-in-DC message tailored by Democratic strategists. It’s Perriello’s home brew. He was first elected as a populist bashing the incumbent’s corporate campaign donors. Now, he’s running against the corporate consensus in the nation’s capital—including his own party’s brass.

Back in January, after Republican Scott Brown won the Massachusetts Senate race, Perriello says, he told party leaders that the Democrats ought to introduce a different jobs bill every week to force Republicans to take a stand: “They said it was a great idea, but then it didn’t happen. And the Senate is always a problem. I think most people in Washington don’t get how serious the job situation is.” He declares it “embarrassing” that the Democrats decided to take a six-week recess to campaign as the economy teeters. “I can’t tell you how many times people in the White House say to me, ‘We want to help you; what can we do?’ I say, ‘Put out a real jobs bill.'” Perriello is pushing to end a corporate tax credit that encourages outsourcing jobs and use the revenue—an estimated $14 billion—for job-creating programs like weatherization and energy-efficiency retrofitting.

That kind of pitch is part of Perriello’s bring-it-home strategy: He says House Democrats have to toil extra hard to show how people in their districts can benefit from the big, abstract bills cooked up in Washington. During the House debate over the climate bill, Perriello recalls, he came to the district and talked to dairy farmers about how they could turn cow manure into power and possibly get off the grid—a notion, he says, that appeals to the “independent and libertarian streaks of farmers.”

Perriello’s positions have also earned him the attention of some well-heeled enemies. From the moment he settled into Washington, he was bombarded with attack ads. Americans for Responsible Health Care, a group funded by the wife of a retired Florida real estate developer, ran an ad blasting Perriello for voting “with the liberals in Washington” for a government “takeover” of health care. An outfit called Freedom’s Defense Fund slammed him for supporting the stimulus. The National Republican Congressional Committee has bought time for ads tying him to House Speaker Nancy Pelosi. Perriello anticipates that in the weeks before the election, corporate front groups will blitz his district with negative ads. The Supreme Court’s Citizens United decision, he notes, will render it even easier for outside organizations to pour money into the race.

But Perriello has been a hardy fundraiser, pocketing nearly $2.3 million as of the end of June. As he tours these towns, people comment on his campaign’s first ad, a slapstick spot that shows him stepping into a cow pie, crawling under desks to lay broadband cable, breathing landfill exhaust, and getting covered with construction dust because “no one will work harder to bring jobs to Virginia.” And the GOP’s “out-of-touch liberal” line of attack may not work so well with a gun-rights advocate who’s hailed the NRA as the “epitome of people-powered politics.” A social-justice Catholic, Perriello backed the anti-abortion Stupak amendment during the health care reform debate. He occasionally drops a slightly drawled “you all” into conversation, telling one group of constituents, “You all have a blessed day.”

The next day, Perriello’s Main Street tours resume with a stop in down-on-its-luck Lawrenceville, where the mayor bemoans the closing of a nearby state prison—maybe, the mayor suggests, it could become a firing range. On the drive to the city of South Boston, Perriello passes by billboards defending the Confederate flag. Decades ago, there was massive resistance to desegregation in this area. More recently, the region’s economic mainstays—tobacco, textiles, furniture-making—have collapsed. “A lot of elites in the Senate and the president’s economic team think that we need to get back just to 2006 and we’ll be fine,” Perriello says. “But a lot of Americans need to get back 20 years or more, to when the middle class had purchasing power.”

That afternoon, Perriello races two hours to Charlottesville, where he’s the celebrity bartender at a fundraiser for groups working against sexual assault and domestic violence. As the congressman slings drinks in a trendy wine bar, he’s gone from one political pole to another, from Red State land to Blue State land, all inside his district.

Several in the crowd are eager to talk politics. They know the GOP is gunning for Perriello, but hope he might benefit from the entry into the race of Jeffrey Clark, a tea party activist who’s running as an independent and could siphon votes from Hurt. Standing near a painting of a woman reading the New York Times, John Hesslebart, a 66-year-old software designer, gushes about Perriello, predicting that he could become a major force in Congress—if he wins. But then, shaking his head slowly, he says the district “is like two different planets.” He takes a sip of wine before adding, “And Tom needs to live in both places at once.”