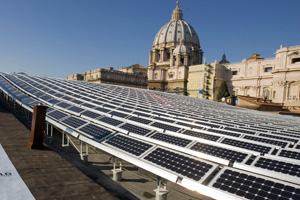 The Holy See has embarked on a new mission: the fight against climate change. In 2007, Pope Benedict XVI announced that Vatican City would strive to become the first carbon-neutral state. Although the Vatican’s plan to purchase carbon offset credits fell through, the sovereign city-state has harnessed the power of the sun with solar panels and a solar generator, and has also made progress with energy conservation efforts. Pope Benedict has added a religious element to the climate change debate by framing the issue as a moral imperative.

To discuss these unprecedented efforts, Need to Know’s Alison Stewart spoke with Mark Hopkins, an energy expert with the United Nations Foundation who has 30 years of experience in energy policy and program development. Hopkins toured the Vatican’s new energy efficient facilities last year. 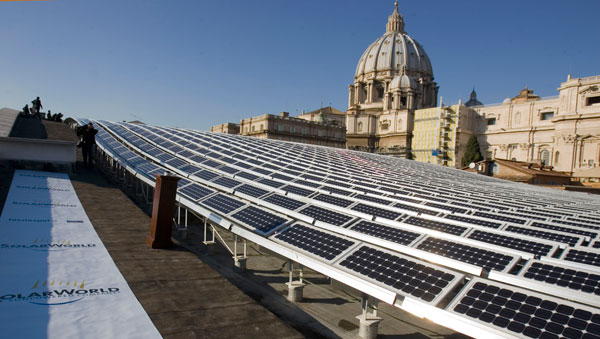 St. Peter’s Basilica is seen in the background of a solar panel set up on the roof of the Paul VI Hall at the Vatican. Photo: Evandro Inetti/Zumapress.com

This podcast was produced by Need to Know as part of the Climate Desk collaboration.