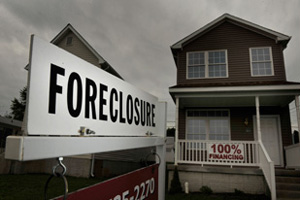 “Foreclosuregate,” as the latest horrible housing mess to befall the US is now being called, is yet another aftershock from the financial earthquakes of 2008 and 2009. But despite dozens of books chronicling Wall Street’s collapse, few authors have charted the breathless rise and spectacular fall of the subprime mortgage industry behind the catastrophe.

Investigative journalist Michael W. Hudson’s new book, The Monster: How A Gang of Predatory Lenders and Wall Street Lenders Fleeced America—And Spawned A Global Crisis, does just that. A staff writer at the Center for Public Integrity, Hudson gives subprime the full treatment it deserves, tracing the industry from its birth—in the ashes of the savings and loan crisis—to its implosion, decades later.

Recently, Mother Jones spoke with the former Wall Street Journal reporter (and MoJo contributor) about the drug-addled, often seamy world of subprime, “the leading edge of a financial hurricane,” as one financial guru called it, a place where fraud was seemingly tucked into every nook and cranny of the system.

Mother Jones: You can fill bookshelves with stories of the Wall Street meltdown, the bailout, and the high drama in the boardroom. But when I finished your book, I thought, “This is the only real investigation of the subprime mortgage industry from start to finish.” Why do you think that is?

Mike Hudson: It’s a bit of a mystery to me, too, why there hasn’t been more shoe-leather reporting on what was happening on the ground level. You think about it: People were lied to about the kind of loans they were getting; they were run through bait and switches; they were taken advantage of and in many cases defrauded. The whole system was contaminated by fraud.

MJ: In The Monster, you write about the “overheated world of subprime, where money, liquor, and cocaine flowed freely, [and] down-and-dirty sexuality often came with the territory. According to dozens of industry insiders, the trading of sexual favors became commonplace in the mortgage business.” Or as one rep for mortgage company New Century put it, “I didn’t want to be a mortgage slut.” How did you get inside this world? 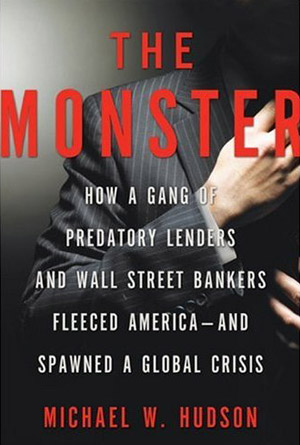 MH: I talked to as many people as I could. I talked to everyone from secretaries to loan officers to branch managers to vice presidents. I probably talked to more than 200 people.

And there were very few people who refused to talk with me. It seemed most people wanted to talk; many people wanted to get things off their chest, wanted to unburden themselves, to set things right. There were a lot of people who felt abused themselves because they went to work for a company that they thought was a legitimate place, and they immediately found themselves pushed and prodded to do things that wore on their conscience. At a lot of these places, you checked your ethics at the door when you came to work each day.

Also, I read lots of lawsuits, lots of court records. I read a huge volume of articles in the trade press. It’s not that this kind of stuff wasn’t ever reported, but it was reported in small ways, in bits and pieces, in obscure currents of the media. So part of my reporting was just piecing all that together.

MJ: There’s this conception out there that the subprime mortgage industry came to life in the late ’90s, or even the early 2000s. When and where do you mark the birth of subprime?

MH: The “where” was Orange County, California, and the “when” was the late 1980s. The modern subprime mortgage industry really got its start during that time. Amid the savings and loan debacle, there were a couple small S&Ls that were able to skirt some of the failures and problems of the industry by doing these kinds of loans. Long Beach Savings and Loan and Guardian Savings and Loan really pioneered the subprime market in that era.

Eventually, one of those S&Ls, Long Beach, left everyone else behind and became really the one main trailblazer for subprime loans. It later morphed into Ameriquest Mortgage, which was part of the biggest subprime mortgage empire out there by the time of the 21st-century mortgage bubble.

MJ: We’ve heard a lot about one godfather-like figure in subprime, and that’s Angelo Mozilo, the overly tanned former chief at Countrywide Financial. But in your book, Roland Arnall, who started Long Beach S&L and later Ameriquest, is really the central figure.

MH: If you had to pick one figure that did more than anyone else to grow the subprime market, and grow it into the monster that it became, it would be Roland Arnall. Now, Countrywide and Angelo Mozilo played a big role, but they were very late to the game. Mozilo, especially in the ’90s, was nervous about subprime, and worried about getting into it. It wasn’t until Ameriquest and a few other Orange County-based subprime outfits really showed that you could make lots and lots of money, and really started threatening Countrywide’s market share, that Countrywide got into it.

MJ: Another big connection you make is the link between Wall Street and Orange County, the epicenter for these subprime outfits. You really zero in on Lehman Brothers to show this link. Why Lehman?

MH: Like Roland Arnall in the subprime mortgage space, Lehman Brothers was among the biggest Wall Street firms that bankrolled subprime. I think Lehman was first or second in packaging mortgage-backed securities for 10 or 11 years. For much of the time they were the fourth-largest [investment house] on Wall Street and were much smaller than Goldman Sachs, which was the largest. Lehman became very aggressive about diversifying the kinds of business lines it was in, and in the mid ’90s, as the subprime business was starting and gaining traction, Lehman Brothers decided to really jump into the business.

MJ: If you fast forward to 2006, 2007, especially 2008, when Lehman crumbled, the sheer amount of subprime loans that it had in its system as subprime tanked had to play a huge role in why the firm failed.

MH: Real estate in general was definitely Lehman Brothers’ downfall. Residential mortgage loans and commercial real estate investments. Lehman was making risky bets throughout the real estate space, and it came back to haunt the company and eventually led to its demise.

MJ: Are there parallels in the story you tell in The Monster and in the rapidly unfolding foreclosure mess we’re seeing right now, with fraudulent paperwork, foreclosure mills, “robo signers,” and so on?

MH: The current foreclosure scandal—with the evidence of backdated documents and false affidavits and these “rocket dockets” that are pushing families into the street—is amazingly similar to what we saw back in the heyday of subprime, when you had falsified documents, mortgage professionals forging people’s signatures on key disclosures, and a rush for speed to push families into subprime loans as quickly as possible, regardless of the consequences.

MJ: What do you think the legacy of the subprime industry will be?

MH: I think the legacy is yet to be written. There have been some efforts at reforming the system and correcting the problems that helped lead us into the crisis, correcting the problems that left American consumers vulnerable to the subprime machine. But there is still a lot of work to do. You can pass all the financial reform laws you want, but they have to be implemented in the real world. And that hasn’t happened yet.