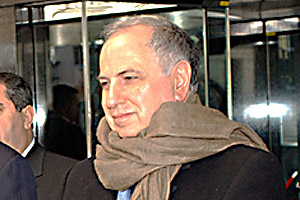 Ahmed Chalabi is at it again. In a discussion on the future of Iraq with Washington Post columnist Sally Quinn at last week’s Washington Ideas Forum, the Iraqi with nine thousand lives insisted that the issue of weapons of mass destruction was only “marginal” in the lead up to the Iraq War. The short conversation failed to explore the former provisional president of Iraq’s impressive knack for dishonest saber-rattling and naked opportunism.

A prominent dissident voice since the early 90s, Chalabi and his Iraqi National Congress fed the Bush adminstration bogus evidence on Saddam Hussein’s non-existent WMD program that was used by the White House to justify the invasion. Flash forward to the present: Chalabi has assumed a prominent place in the administration of Iraqi Prime Minister Nuri al-Maliki, leading continuing efforts to weed out members of Saddam’s Sunni Baathist party. Meanwhile, the National Iraqi Alliance—of which Chalabi’s INC is a part—finished third in the March elections.

“The issue was never weapons of mass destruction,” he insisted. “It was the repression of Saddam against the Iraqi people, and the threat that Saddam constituted against the Iraqi people.” Chalabi maintains that he and the INC didn’t provide misleading evidence on WMDs, but merely introduced the Bush administration to those who provided it.

“The US has a massive intelligence apparatus,” he said. “It is very improbable that they would take the word of a person or an exile organization opposed to the regime and act on the basis of this to go in the country and wage war,” he said. “They made their own decision. And I think the various investigations that happened afterwards showed that our input into the intelligence was marginal.” While the war was worth it, he said, the extended occupation shouldn’t have happened—just as he advised at the time, he hastened to mention.

On the topic of government formation in Iraq, Chalabi said his coalition’s choice to push Maliki as its candidate for prime minister was an important step in breaking the deadlock that has stalled governance for the past seven months. Things got marginally testy when Quinn asked whether Iraq was headed for a theocratic future, and pushed Chalabi, a Shiite, on his relationship with radical anti-American cleric Muqtada-al Sadr. “Sectarian division in Iraq is not about theology—it’s about power, and it’s about power structure. And it goes back a long time,” he said, launching into an abbreviated history of Shiite/Sunni relations over the past 500 years.

Chalabi described his relationship with Iran as close, and considers Mahmoud Ahmadinejad a “smart man.” The Iranian president’s claims that the U.S. was behind the attacks on September 11 are “prevalent in the Middle East. It’s nonsense, but it’s prevalent. And people accuse all kinds of organizations and states of being behind 9/11. They could not believe that 19 people, young men, could do such damage, such lasting damage to America.” Quinn chose not to press Chalabi on allegations that he passed US secrets on to the Iranians.

Despite foreign meddling and violence, he reminded the audience, Iraq has managed to form a government, boding well for the country’s democratic future. Never one to squander the spotlight, Chalabi announced a bold vision to form a “concordant” consisting of Iran, Syria, Turkey, and Iraq—a sort of EU for the Middle East.

“We would moderate those extremist tendencies, and we would create understanding instead of conflict,” he said. “We hope to persuade the world that this would be a good idea . . . and I think Iraq would be the heart of this coalition.”

Since 9/11, Ahmed Chalabi has gone from privileged exile, to close U.S. confidante, to disgraced opportunist, to reborn Iraqi politician. As Maliki continues to draw him close, there’s no telling where he might end up (or what type of mischief he might be causing) in another ten years.