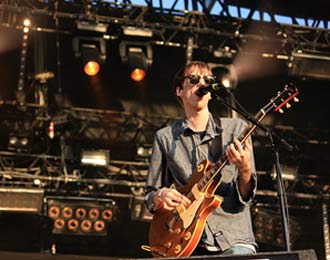 Photo by <a href="http://www.flickr.com/photos/anousonne/">anousonne</a> under a CC license.

Bradford Cox is growing up. As the singer and primary songwriter of Atlanta-spawned Deerhunter, and under his solo moniker Atlas Sound, his music has often bridged the closer-than-you’d-think divide between pop accessibility and experimentation. But early Deerhunter releases tended toward noise and bombast, an overt exertion of youthful energy and chaos. With each subsequent release, with Deerhunter and on his own, Cox has increasingly explored the more contemplative side of his musical coin, and to great effect. His 2008 Microcastles/Weird Era Cont. contained some of his band’s catchiest tunes and most fully realized lyrics to date. Deerhunter’s brand new album, Halcyon Digest, further tones down the noise and ramps up the vocals. We recently probed Cox’s complex mind to learn about the music he listens to in the privacy of his own tour bus.

Mother Jones: What’s your favorite new or upcoming release, and why?

Bradford Cox: Avey Tare’s Down There, because it makes every day Halloween.

MJ: How about something way outside your genre?

BC: Janelle Monae’s The ArchAndroid, because I like good music.

MJ: Shuffle your iPod for me and name the first five songs that pop up.

BC: Yes, “Owner of a Lonely Heart”

BC: 1. Stereolab, Cobra and Phases Play Voltage in the Milky Night
2. Storm and Stress, Under Thunder and Fluorescent Lights
3. Steve Reich, Drumming

BC: Glenn Beck’s voice. While I’m beating off.