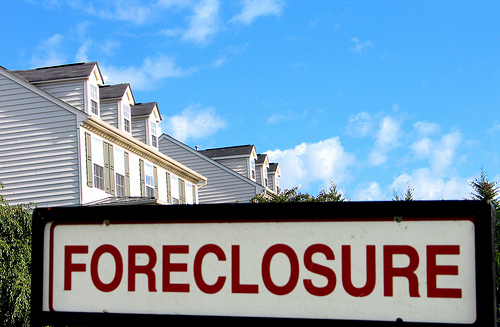 For American homeowners, the hearing was an eagerly anticipated showdown between their representatives in Congress and the banks on the other end of the foreclosure notices. For members of the Senate banking committee, it was a mere blip on their radar. On a rain-soaked Tuesday afternoon, the committee—or at least those few members who bothered to show up—questioned six housing experts on “Foreclosuregate,” the latest housing industry scandal that’s prompted a nationwide probe by 50 state attorneys general. The hearing was billed as a fact-finding mission to “investigate” the “robo signers,” fabricated documents, and systemic flaws currently bogging down the country’s foreclosure pipeline. Set to face the most scrutiny were mortgage servicers, the underregulated middlemen who act as the face of your loan by collecting payments, providing customer service—and foreclosing on you when you fall behind (and sometimes, even when you don’t).

What actually transpired was a light questioning that broke little new ground. So few lawmakers attended the hearing that by the end only two senators remained to discuss this controversial issue: outgoing Sen. Chris Dodd (D-Conn.), the committee’s chairman, and Sen. Jeff Merkley (D-Ore.), one of the upper chamber’s few true consumer advocates. Most startling of all, though, was the nagging feeling of déjà vu that hung over the hearing: that we’ve been here before, asked the same questions, and heard the same answers from the banks. On everything from servicers’ conflicting actions—namely, modifying homeowners’ mortgages while foreclosing at the same time—to their assurances that they’re not financially incentivized to foreclose (all evidence to the contrary), the arguments trotted out by industry officials sounded painfully familiar.

Take, for instance, this frequent complaint from homeowners navigating the loan modification minefield: While their servicer was arranging a modification to lower their monthly payments, homeowners say, the same company also began foreclosure proceedings. In other words, the left hand doesn’t know what the right one is doing. At a banking committee hearing in Philadelphia in April 2008, a local resident, Yajaira Cruz Rivera, recounted this story:

After months of negotiation with my lender [GMAC], ACORN Housing modified my loan, so that I am paying $1,284 a month and that my loan has a true fixed interest rate…My modification officially does not take place until 6 payments at the new rate are made and on top of that GMAC’s loss mitigation department forgot to tell their collections department that my loan had been modified and my arrears settled. Just three weeks ago, I received a notice for a May Sheriff Sale on my door.

The solution to this problem would seem straightforward: Internally, servicers should block all foreclosure proceedings while a homeowner is in the modification process. Yet more than two years later, the “dual track” problem, as it’s called, is still prevelant. Iowa attorney general Tom Miller said in his prepared testimony on Tuesday that the servicing industry’s “biggest problem” remains the disconnect between modifications and foreclosures, one that causes homeowners to think they’re getting help when they’re really getting the boot.

Worse yet, the answers offered by two of the housing industry’s representatives at Tuesday’s hearing—Barbara Desoer, president of Bank of America Home Loans, and Chase Home Lending CEO David Lowman—offered little assurance that the dual track problem was being fixed. Lowman mentioned that federal guidelines for the Home Affordable Modification Program, the Treasury’s flagship relief effort, say homeowners shouldn’t be foreclosed on while they’re under consideration, but even that continues to happen. And if HAMP did work as intended, only one in six home loans are eligible for the program.

Most telling was Merkley’s direct questioning of the two industry executives on their own internal efforts to fix the dual track issue:

MERKLEY: Have you changed your practices to suspend the foreclosure proceedings, not the final step but the whole stream of events?

LOWMAN: We have not.

MERKLEY: Ms. Desoer, how about with Bank of America? Would that be possible to set aside the foreclosure operation while you’re in the modification process?

DESOER: That is what we’re proposing to consider, but we can’t do it independently except on our own portfolio of loans, and that’s why we’re working with the state attorneys general on the suggestion to do that.

Likewise, it was déjà vu all over again when the senators discussed servicers’ financial interests, and how those interests run counter to those of homeowners. Diane Thompson, an attorney with the National Consumer Law Center, testified that “the foreclosure process itself generates significant income for servicers” and that “servicers have seen their profitability per loan rise in the last year as losses to investors from foreclosures have skyrocketed.” An expert on mortgage servicing, Thompson suggested lawmakers use more mandates and fewer incentives via Treasury’s HAMP program to make servicers offer and follow through on more government modifications. (HAMP’s miserable success rate so far is proof positive how resistant servicers are to modifying loans.)

Thompson’s testimony should sound familiar to some members of the banking committee. In a July 2009 hearing on Capitol Hill, as foreclosures continued to mount, she offered the same grim assessment to lawmakers. “Until servicers face large and significant costs for failing to make loan modifications, until servicers are actually at risk of losing money if they fail to make modifications, no incentive to make modifications will work,” she said in her prepared remarks last year. “What is lacking in the system is not a carrot; what is lacking is a stick.” Yet nearly every industry official who’s appeared before Congress has assured worried lawmakers that no such financial incentive problem exists. Tuesday was no different. “It is in all of our best interests” to modify a loan, said Bank of America’s Desoer.

In other words, we’ve heard all this before. The odds that this hearing, or upcoming ones like it, will bring about changes in how mortgage servicers do business are slim to none. After all, dozens of congressional hearings in recent years have failed to get servicers to change their ways, and to help more homeowners. In his testimony, Miller, the Iowa AG, admitted as much: “We believe that there have been many missed opportunities over the past few years, and are deeply disappointed that our many previous attempts at working with the servicers have not been as successful as we had hoped.” He added, “Foreclosures at the scale we are currently experiencing, and unfortunately will continue to experience for some time, are a public policy issue. It is well past time to once and for all tackle the issue of foreclosures and loan modifications with the resources and urgency it deserves.”

As it turned out, on the same day as the Senate hearing, one of the few watchdogs urgently tackling the foreclosure crisis, the Congressional Oversight Panel, released a far more probing report on the ramifications of Foreclosuregate. As the five-member panel points out, the unscrupulous foreclosure practices of mortgage companies could imperil HAMP by calling into the question the validity of the entire program—whether servicers had the legal right to modify or foreclose, whether the crucial Net Present Value test that determines if someone gets a modification was unfairly skewed, and more. The COP also digs deep into Foreclosuregate’s doomsday scenario: if banks are forced to repurchase loans because they relied on bogus paperwork and lied about the quality of the loans. In a worst-case scenario, the Panel estimates that Bank of America, for instance, could suffer $43 billion in losses; with that in mind, the panel advises Treasury to conduct new stress tests on banks to study their ability to absorb new loan-related losses.

Despite claims that the financial system is on the mend, the COP’s ultimate conclusion is ominous. “The housing market and the broader economy remain troubled and thus vulnerable to future shocks,” the panel writes. “In short, even as the government?s response to the financial crisis is drawing to a close, severe threats remain that have the potential to damage financial stability.”