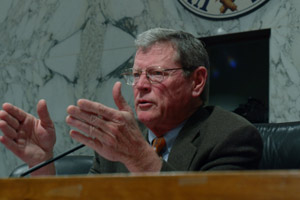 Now that the Republicans have won a majority in the House, it looks like their first fight will be against…Republicans? The Hill reports that Oklahoma’s arch-conservative senator, Jim Inhofe (who received a perfect score from the American Conservative Union in 2009), intends to fight Sen. Jim DeMint’s (R-SC) proposed ban on earmarks. DeMint’s ban, Inhofe argues, unconstitutionally cedes congressional spending power exclusively to the executive branch.

Odds are, Inhofe admits, that DeMint’s moratorium will pass. But he’s determined to go down swinging, and call out DeMint and others for earmark hypocrisy. He told The Hill:

I know politically it’s the dumbest thing for me to say I’m for earmarks, but it would cede authority to President Obama. But McCain and DeMint are not being honest about how they define them. I’ve been ranked as the most conservative member of the Senate, so this is coming from a conservative.

I have quotes, and I’ll use them on the floor to make sure McCain and DeMint can’t wiggle out of how they define earmarks. This is an Obama-DeMint-McCain effort… I’ll lose on this, but I want to be on the record.

Also on the record: the statement released on Tuesday by Jim DeMint publicly announcing his plan to suspend earmarks, co-signed by ten Republicans including tea party-backed Marco Rubio and Rand Paul (who’s wasted no time playing both sides on the issue), Texas’ John Cornyn, and Inhofe’s fellow Oklahoman Tom Coburn. Inhofe says the tea party-backed senate newbies have been misled. “These [earmarks] have been demagogued for two years now,” he said. “It’s been presented in such a way that this is somehow conservative.” Luckily for Inhofe, he has some powerful friends on his side. Minority Leader Mitch McConnell also rejects an earmark ban, citing the same argument as Inhofe: that it wouldn’t address the problem of congressional spending sprees, and would hand spending authority over to President Obama. DeMint is, effectively, picking a fight with his boss.

Meanwhile, over in the House, Speaker-in-waiting Boehner has pledged to suspend all earmarks, positioning the issue as a key plank in the GOP’s agenda for the 112th congress. It’s not clear, though, that all House Republicans are on board.

On something as central to the conservative dogma as government spending, the brewing debate in the Republican caucus is curious. It rips a gaping hole in the portrait of party unity that last Tuesday’s midterm rout seemed to paint. The lesson here: if you’re going to be the Party of No Earmarks, make sure everyone’s on board.