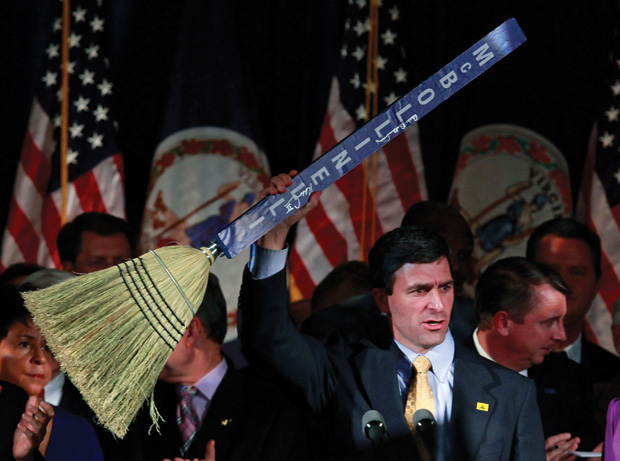 Mark Wilson/Getty ImagesPerhaps you remember Breastgate: Back in April, Virginia’s newly elected Republican Attorney General Ken Cuccinelli apparently decided that the state-issued lapel pins worn by his staff were a little too libertine. The pins—which replicated the 1776 state seal—featured Virtus, the Roman goddess of bravery and military prowess, with her left breast exposed. Cuccinelli requested a new version that covered up the warrior’s bosom. Virtus, he joked to his staff, was now “a little more virtuous.”

The move set off a firestorm, complete with comparisons to John Ashcroft’s purchase of $8,000 drapes to cover up the Justice Department’s classical statues. But Cuccinelli remained unfazed—in fact, throughout his first year in office, he’s clearly relished his role as a political lightning rod. He’s one of a group of crusading lawyers who’ve helped transform the state attorney general’s office—a position once considered a bureaucratic backwater—into a launching pad for ideological warfare.

Under the Obama administration, conservative AGs have had ample opportunities to gain a national platform. More than 20 states have sued the federal government over the health reform law, challenges almost exclusively led by Republican attorneys general. But Cuccinelli, one of the first state officials to file suit, has gone further. A rundown of his efforts reads like a field guide to the modern conservative agenda. Out of the gate, Cuccinelli contested the Environmental Protection Agency’s plan to regulate greenhouse gases and investigated an eminent climate scientist. He went on to assert that Virginia can tighten regulations on abortion clinics by treating them like hospitals; interrogate suspected illegal immigrants about their citizenship status; and install decorations on public land celebrating “the birth of Jesus Christ”—so long as they’re mixed with “such secular items as lights, candy canes, wreaths, poinsettias, fir trees, snowflakes, and red and green ribbons.”

Cuccinelli’s crusades, amplified by his nonstop appearances at rallies, in town halls, and on TV, have made him a hero of the tea party movement, where he has found his political soulmates. “I used to think I was one of a handful of people who even read the Constitution and tried to abide by it,” Cuccinelli told me. Elected to the state Senate in 2002 at age 34 after a career in private legal practice, Cuccinelli quickly developed a reputation for his manic work ethic and strident politics. “It’s not that he’s more conservative than any AG we’ve ever had, or than any AG ever,” says liberal Virginia blogger Ben Tribbett. “It’s that he’s not afraid to go out on every issue and try to hit a home run.”

State AGs have a broad job description, which has enabled officeholders of both political persuasions to take liberties with the position. Still, until the 1990s, the job rarely drew much attention. “It used to be as exciting as being head of the highway department,” says Michael DeBow, a law professor at Alabama’s Samford University and a former advisor to the state’s onetime Republican attorney general Bill Pryor.

Then, in 1994, Mississippi’s Democratic AG, Mike Moore, took on Big Tobacco, leading an unprecedented multistate lawsuit to recoup health care costs from cigarette manufacturers. The case, which led to a landmark $246 billion settlement, inspired other progressive AGs to launch their own campaigns against corporate malfeasance—then use them to climb the political ladder. New York AG-turned-governor Eliot Spitzer, for one, earned his reputation as “the people’s lawyer” by suing big Wall Street firms for committing fraud, Midwest power plants for causing acid rain, and drug companies for concealing information about clinical trials.

The old joke is that AG stands for “Aspiring Governor.” But Moore’s trailblazing case—featured in the 1999 movie The Insider—upped the ante for state AGs harboring grander political ambitions, prompting them to become ever more aggressive. Such swashbuckling also began to rouse the opposition. Alarmed by the tobacco suits and the dwindling number of Republican AGs in office, Alabama’s Bill Pryor created the Republican Attorneys General Association in 2000 to get more conservatives elected, soliciting contributions from the US Chamber of Commerce and other corporate donors. Sure enough, the ranks of Republican AGs have grown—and the position has become increasingly politicized. Before Cuccinelli, for example, there was Kansas AG Phill Kline, who launched an investigation aimed at shutting down abortion doctor George Tiller. (Tiller was murdered by an anti-abortion zealot in 2009.)

The implications of this shift have become clear in the current lawsuits against health reform, one of the biggest challenges that state AGs have mounted against a federal law since a group of Southern attorneys general fought school desegregation in the 1950s. Though most constitutional experts doubt the AGs will prevail, their efforts have complicated implementation of the law and inspired legislative challenges that could stand a better chance of succeeding.

Cuccinelli argues that he’s no activist AG, pointing out that he’s legally required to render opinions when a legislator requests them. “It is him reacting to events, not causing them,” insists his spokesman, Brian Gottstein. It’s true that some of the inflammatory legal opinions he’s issued—on immigration, abortion, and religious displays—have come at the behest of GOP Delegate Bob Marshall, an early supporter of Cuccinelli’s. (Though such opinions aren’t legally binding, they establish an important legal precedent for future legislation or executive orders.) But Marshall himself admits that he wouldn’t have sought such opinions if Cuccinelli and Republican Gov. Bob McDonnell weren’t in power. “Now the opportunity is different,” he says.

But if Cuccinelli has at times been a foot soldier in a broader conservative war, he’s also launched his own battles. In March, Cuccinelli advised Virginia’s public universities and colleges against extending nondiscrimination protections to gays and lesbians—a move McDonnell ultimately derailed. Less than two months later, Cuccinelli attempted to subpoena former University of Virginia scientist Michael Mann—best known for his “hockey stick” graph showing a rise in global temperatures over the last century—for allegedly producing “falsified” data on climate change, an investigation that critics dubbed a witch hunt.

Nevertheless, Cuccinelli portrays himself as the servant of forces beyond his control. “I said if the federal government crosses certain lines, that we would challenge it,” he declared at a town-hall meeting in September. “[A]ttorneys general in the states are the last line of defense against an out-of-control and overreaching federal government, and I’m not going to step aside and not do my job.”

There’s widespread speculation that Cuccinelli is positioning himself for a gubernatorial run in 2013. Some of his tea-party supporters have even higher hopes, dreaming of a bid for Senate or even the presidency. But even his biggest opponents concede that Cuccinelli’s bomb-throwing antics go beyond political grandstanding. “I think he believes every word of it,” says Democratic Delegate David Englin, one of Cuccinelli’s most outspoken critics. “He didn’t conceal any of this when he ran—people weren’t paying too much attention to the attorney general’s office.”