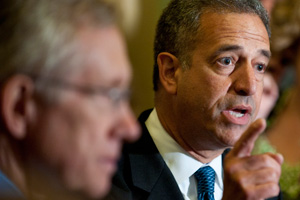 And so bows out one of the Senate’s liberal legends, Wisconsin’s Russ Feingold. Since he was elected in 1992, Feingold has carved out a career as an independent-minded Democrat, a politician hardly in lockstep with his party. For instance, Feingold was one of two Democrats to vote against the financial reform bill passed by Congress this summer.

Yet Feingold couldn’t overcome his party’s enthusiasm gap in 2010, nor the anti-incumbent wave sweeping the country, nor the attack ads against him funded by outfits like the US Chamber of Commerce, which spent $750,000 to defeat him. All told, outside groups spent $1.32 million opposing Feingold’s reelection campaign, according to the Center for Responsive Politics; the shadowy, conservative American Action Network lead the way, pouring $910,000 into the race. Meanwhile, Ron Johnson, the conservative businessman who defeated Feingold, funelled $8.2 million of his own money into his campaign.

A surprise winner at the state GOP’s convention, Johnson ran on a traditional conservative platform: He opposes same sex marriage and the Obama admnistration’s stimulus; supports protections for the Second Amendment and a balanced budget amendment; and wants to lower taxes and repeal the Obama administration’s health care reform legislation, which he described as the “single greatest assault to our freedom in my lifetime.” What landed Johnson in headlines earlier this year was his claim that climate change wasn’t created by humans but instead was the result of “sunspot activity.”