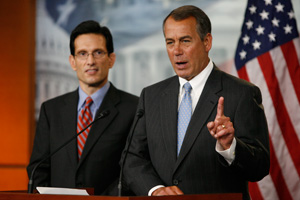 With their repeal effort all but destined to fail next week, congressional Republicans have another trick up their sleeve to bring down “Obamacare.” Rep. Steve King (R-Iowa) is pushing a proposal that would require every bill that comes before the House appropriations committee to exclude any funding for implementing or enforcing the federal health care law. King first floated the idea back in December, but Mother Jones has learned that the radical move now has the support of the new chairman of the appropriations committee, Rep. Hal Rogers (R-Ky.).

“Absolutely,” Rogers replied Thursday, when asked whether he supported King’s proposal. The appropriations chairman agreed that such a move would help dismantle health reform piece by piece. But when asked to elaborate on the Republican attack strategy after the repeal vote, Rogers simply said, “I have no further comment.”

Rogers appears to be the first prominent Republican in a leadership position to back King’s proposal, and his unequivocal support could give the idea legs and encourage the House GOP leadership to come aboard as well. But while Rogers may now be onboard with defunding health reform, it didn’t stop the lawmaker famously known as “the Pork King” from requesting funds from the very same law earlier this year. Back in August, the Kentucky lawmaker personally requested a $1.5 million nursing health-clinic grant under a program created by the health reform law, as Think Progress originally reported.

“I think this will be done not in a shotgun approach—I think it would be more a rifle attack,” said Rep. Phil Gingrey (R-Ga.).

Republicans already ran into a defunding roadblock in the last Congress, when a proposal to eliminate the law’s requirement that businesses report more than $600 in health care expenses to the IRS—despite receiving support from both parties—failed, because no one could agree on a way to make up for the lost savings. Taking away health reform funds from every appropriations bill could run into similar problems, as any money saved as a result of the provisions would also need to be compensated for.

Even the most adamant opponents of health reform are reluctant to wholeheartedly back King’s across-the-board defunding proposal. “I wouldn’t say that every single appropriation for the 2400-page bill would be withheld,” Rep. Phil Gingrey (R-Ga.) said in an interview Thursday. “I think this will be done not in a shotgun approach—I think it would be more a rifle attack,” Gingrey added, suggesting that Republicans would try to defund individual programs.

If King’s proposal does gain momentum both on and off Capitol Hill, it could create a divide on the right between those who want to choke of all health reform funds that come through appropriations and those who are willing to admit that such a move is neither feasible nor desirable.

Republicans would probably achieve the most success in undermining the law by narrowing their targets to a handful of provisions that could actually be undone or defunded. But by demanding that funds be withheld across the board, King has opened the way for the conservative right to harangue Republicans for allowing any money backing health reform to slip through the cracks.