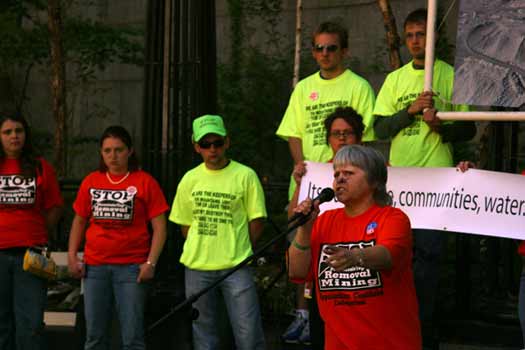 The environmental movement lost a leader Monday night with the death of Judy Bonds, executive director of Coal River Mountain Watch. Bonds, 58, had battled cancer for several months, but to the end was a leading voice in the movement to end mountaintop removal coal mining.

Often sporting a “Save the Endangered Hillbilly” T-shirt at public events, Bonds consistently reminded us that we are not dealing with an “environmental” threat, but a human one as well. Just a few months ago, she was part of the organizing team for Appalachia Rising, an event that brought 2,000 anti-mountaintop removal activists to Washington. Coal River Mountain Watch co-director Vernon Haltom memorialized her in a message last night:

Judy was more than a co-worker, friend, and mentor: she became family. She inspired thousands in the movement to end mountaintop removal and was a driving force in making it what it has become. I can’t count the number of times someone told me they got involved because they heard Judy speak, either at their university, at a rally, or in a documentary. Years ago she envisioned a “thousand hillbilly march” in Washington, DC. In 2010, that dream became a reality as thousands marched on the White House for Appalachia Rising.

Judy endured much personal suffering for her leadership. While people of lesser courage would candy-coat their words or simply shut up and sit down, Judy called it as she saw it. She endured physical assault, verbal abuse, and death threats because she stood up for justice for her community. I never met a more courageous person, one who faced her own death and spoke about it with the same voice as if it were a scheduled trip.

She was a tireless, funny, and inspiring orator, and a savvy and brilliant community organizer. She was fearless in the face of threats. As the godmother of the anti-mountaintop removal movement, she gave birth to a new generation of clean energy and human rights activists across the nation. In a year of mining disasters and climate change set backs, she challenged activists to redouble their efforts.

Bonds was a real inspiration to many, and her voice will surely be missed.