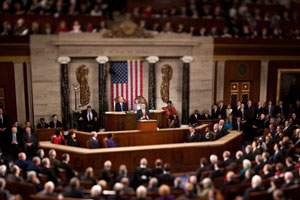 Is President Barack Obama a fierce down-sizer of government, or an ardent champion of boosting government investment in the economy? Well, he’s both.

In his second State of the Union speech, delivered Tuesday night, Obama trotted the tight wire. To show he’s a mighty crusader against deficits, he declared he would impose a five-year freeze on non-security discretionary spending. And to show he’s (still) the rescuer of the US economy, he proclaimed he wants to spend billions on—that is, invest in—innovative technology (such as clean energy), infrastructure (including high-speed rail and high-speed Internet) and education (including 100,000 additional science, technology, engineering, and math teachers within the next eight years), all so the United States can “win the future,” as it competes with China and other economic superpowers.

What this means is that a lot of folks on both sides of the ideological divide won’t be so happy. Conservatives and Republicans will grouse that Obama hasn’t truly learned the lesson of the 2010 elections and remains a staunch lefty spendthrift. Liberals will fret that he’s yielding too much ground to the tea partiers who believe with religious fervor that what ails the economy is government spending (not the economy itself). As for the mushy middle, those much sought-after independent voters—will they go for Obama’s right-left meld? After all, many of them seem to want a government that doesn’t spend money and a government that revives the economy. It might take more than minutes to see if this one-man duet (save-and-invest) connects.

One test of this speech will be whether it convinces those Americans who are facing serious economic troubles. Standing before an audience with far more Republicans in it than the year before, Obama emphasized a program of innovation and investment geared toward the future—more so than job-creating programs that will boost employment today. Certainly, Obama’s aim is to invest in endeavors that produce good jobs. And these projects have a progressive bent: ending tax subsidies for fossil fuels in order to finance a 33-percent hike in federal funding for clean energy technology (though he’s still pushing nuclear energy and clean coal); placing 1 million advanced technology vehicles on US roads by 2015; launching a National Wireless Initiative to bring high-speed Internet to 98 percent of the United States; and repairing crumbling roads, bridges, and transit systems.

But the context in which he offered all this was not jobs-jobs-jobs. Instead, the message was, if the nation doesn’t get its act together, its old, wind-up clock will be cleaned by the Chinese and others. (Obama noted, for instance, that China is “home to the world’s largest private solar research facility and the world’s fastest computer.”) It was back to the future, as he recalled the Sputnik challenge:

Half a century ago, when the Soviets beat us into space with the launch of a satellite called Sputnik, we had no idea how we’d beat them to the moon. The science wasn’t there yet. NASA didn’t even exist. But after investing in better research and education, we didn’t just surpass the Soviets; we unleashed a wave of innovation that created new industries and millions of new jobs.

But that took time. Years. No wonder this line didn’t draw much of a reaction from either Democrats or Republicans.

With this speech, Obama did not provide immediate gratification on jobs. Hours before the speech, at a briefing for reporters, Gene Sperling, Obama’s top economic adviser, explained that much of the here-and-now jobs initiatives the White House had been considering placing in the State of the Union address were included—thanks to savvy administration negotiators—in the tax compromise that Obama cut with Republicans last month. That deal was initially regarded as a GOP victory, given that the Republicans won a two-year extension in the tax cut bonuses for the rich. But, as Sperling noted, the other provisions included by the White House—an assortment of tax cuts and credits for middle- and low-income Americans, plus an extension of unemployment benefits—are expected to juice up the economy by .5 to 1 percent this year. In other words, the administration had already set up its here-and-now jobs-creation program.

Prior to the speech, White House aides were saying, with pride, that it would not be a routine laundry list of proposals. But the address did not fully escape that typical State-of-the-Union hazard. But the president did not dwell on health care. There was no reference to “Wall Street”; he barely mentioned financial reform. He said nothing about gun control. His two paragraphs on the Afghanistan war were obligatory.

Following up on his Tucson speech, Obama did refer to the need to “work together.” But he stayed clear of any direct references to Republican obstructionism—or overheated rhetoric. He was aiming for that above-the-fray feel. This might resonate among independent voters, but there was not much to stir the base. Except for competence and a coherent vision. Many Washington progressives were looking to the speech for signals on what Obama might do regarding Social Security. He noted he would oppose privatizing the program and “slashing benefits.” But is that the same as opposing cutting benefits? He didn’t say.

There’s that old line about details and the devil. And the White House is now racing to complete the budget for the coming year, which will be released next month. Obama’s grand bargain—freezing government spending so the government can spend more in priority areas—cannot be judged until it is known what will be squeezed from Peter to invest in Paul.

Ultimately, this speech, not full of punch, was the set-up for the political battle that will rage from now until Election Day 2012. Obama wants to use government to revive the US economy. But he has calculated that he can only do so if Americans believe he is simultaneously tightening the belt of the bloated beast in Washington. The Republicans, meanwhile, will continue to reiterate their mantra: the only thing we have to fear is government spending and debt. A fundamental and ideological disagreement is at hand: government is evil, government can help. Obama is conceding part of the argument (yes, we must do something about spending) to win the argument (we must engage in communal action to survive and succeed in the global economy). To win the future—and the next election—the president has to hope that he has figured out the right cost/benefit ratio.