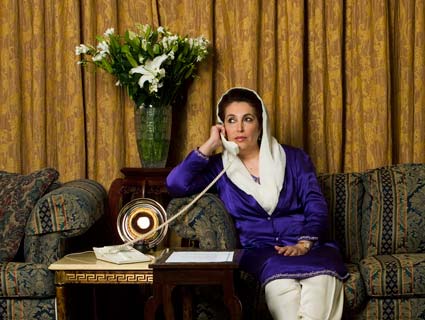 To hear an interview with Fatima Bhutto, Benazir Bhutto’s niece and author of a new memoir, see “Fatima Bhutto on Pakistan, Egypt, and Middle East Unrest.”

When a suicide bomber killed Benazir Bhutto in December of 2007 in her native Pakistan, not everyone was surprised. Over three decades, Pakistanis had watched three of Benazir’s immediate family members murdered. Benazir had just returned from exile in Dubai in hopes of being reelected for a third term as Prime Minister, stepping back into the fast-moving and often bloody currents of Pakistani politics. It wasn’t just their charm that earned the Bhuttos the comparison with the Kennedys: Upon reentering Pakistan, it was as if Benazir had unlocked the doors to her family’s curse.

When the filmmakers set out to make the documentary Bhutto about Benazir, they too got a taste of the Bhutto curse. “Three days after checking out of the Marriot Islamabad,” writes American director Duane Baughman, “the entire hotel was blown to the ground by a suicide bomber and a truck full of explosives, killing over 40 people.” Despite this haunting experience, Baughman and his crew went on to interview dozens of allies, family members, historians, and academics and used unaired footage of the Bhuttos and audio recordings of Benazir create a dense, chronological look at Bhutto’s tumultuous life and the predicaments in which her country has found itself over and over again. And though the film sympathizes heavily with Benazir, it also hints at the shadows inherent in her controversial persona.

Benazir Bhutto did not grow up hoping to join politics, but began conversing with her father Zulfikar Ali Bhutto, head of the Pakistan People’s Party, after he was sentenced to death by then-dictator Zia-ul-Haq. During these visits, she listened gravely to his tenets and accepted a fate tied to public leadership. It was unusual for a Muslim patriarch to choose a daughter to continue his legacy, but Zulfikar nevertheless “gave her the mantle of the party,” says Mark Siegel, a close friend of Benazir’s and a Bhutto co-producer.

When first elected Prime Minister, Bhutto’s potency seemed more related to her international fame than her ability to reform Pakistan. On a visit to the US, she proudly proclaimed: “Democracy is the greatest revenge,” thereby becoming a hero to the Western world. But, as Benazir herself put it, “We were in office, not in power.” The Pakistani president was hostile to her, the military deeply suspicious of a female leader. They deposed her on charges of corruption, and she retreated with her family. Her spirit remained strong, however. As Siegel recounts in Bhutto, Benazir told him she heard that Zia-ul-Haq had said: “The worst mistake I’ve ever made in my life was letting Benazir live.” She looked at Siegel and said, unflinchingly, “He’s right.”

The second time Bhutto served as Prime Minister, from 1993-1996, her leadership was more aggressive, and more rife with corruption charges, and with tragedy. Her brother Murtaza, a political activist, was gunned down. Murtaza’s daughter, Fatima Bhutto, believes to this day that Bhutto helped assassinate her brother, a conviction she wrote about in her memoir Songs of Blood and Sword. But though it mentions them, Bhutto fails to delve too deeply into whether the charges against Benazir were founded. As Fatima said of her aunt’s political reign: “Power was the end goal…that was the only constant.”

And if Benazir was tempted by, and abused, the wealth and power her office afforded, her husband Asif Ali Zardari, Pakistan’s current president, has done nothing to clear the record. In fact, a 2010 report by Transparency International Pakistan revealed that 70 percent of Pakistanis see Zardari as more corrupt than his predecessor, Musharraf. As intense flooding devestated the countrysides in August, Zardari caught the first plane to a personal chateau in France, and he’s been criticized for his impotence when dealing with millions of displaced refugees and disappearing humanitarian aid. Yet in Bhutto, he is a sympathetic, loving husband who gets teary-eyed thinking about his children and whose fortune was amassed through allegedly simple business dealings.

Bhutto relies heavily on impressions from Western friends (authors, classmates, journalists, diplomats, even Arianna Huffington make appearances) or Benazir’s family members. Some of the Pakistanis in the film are Bhutto’s harshest critics, alluding that the family’s glamorous veneer—their eloquence, sleek style, Oxford educations and comfort with Western culture—shielded them from closer examination by the Western world. As a viewer, I would have liked to hear more from those who live eons away from press meetings and state dinners, people who experienced Bhutto’s rule from the ground.

What Bhutto does well is concisely dissect history to reveal the United States’ role in complicating Pakistan’s predicaments (and its own, for that matter). After the US poured billions into arming Pakistanis to fight the Soviets in Afghanistan, it then abandoned the country to manage dangerous weapons and terrorist factions on its own. “I fear we have created a Frankenstein,” Benazir once warned George H.W. Bush. Her premonition fell on deaf ears, and, well, you know the rest of the story.

By tracing the Bhutto family’s entrances and exits from power in Pakistan, the film highlights how inextricable the family’s history is from the country’s. Perhaps because of this, Benazir’s life remained much more in the public sphere than the private. “She determined early on that she would never have a personal life,” remembers Seigel. Whether motivated by the promise of wealth and power, as some would suggest, or by the hope that her country could transform into a progressive democracy, “She was never interested in the moment,” says Zardari. “She was interested in the light at the end of the tunnel, in history itself.”