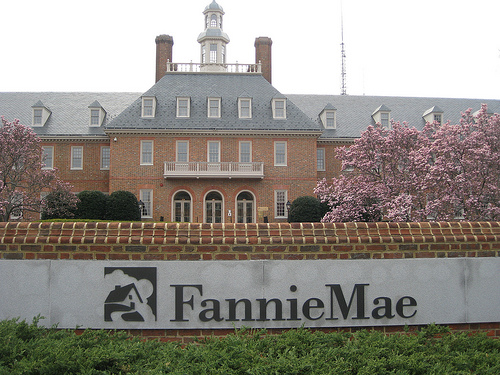 First you bailed out Fannie and Freddie. Now you’re paying their legal bills.

Taxpayers have covered $434 million in legal fees for Fannie Mae, Freddie Mac, and their highly-paid executives since the federal government took over the wounded housing giants in September 2008, according to data (PDF) provided to Mother Jones by a congressional source.

A significant portion of those taxpayer-funded legal expenses—$163 million, or nearly 38 percent—was spent defending the two companies and their top brass, including former Fannie CEO Franklin Raines and CFO Timothy Howard, against charges of fraud, abuse, and other misconduct. Worse yet, a top state regulator currently suing Fannie Mae says the company is grossly overspending on its legal defense “to delay and stall, all while racking up astronomical legal costs and sticking America’s taxpayers with the bill.”

On Tuesday afternoon, a Congressional subcommittee will grill Fannie and Freddie officials on the two companies’ lavish legal spending. The hearing is the result of an investigation by the House financial services committee’s oversight and investigations subcommittee, which spent several months looking into how much the twin housing giants, known as government-sponsored enterprises (GSEs), have spent on outside counsel and legal defense. Fannie and Freddie’s regulator says that so far, taxpayers have absorbed about $150 billion in overall losses from the two companies, a figure that could ultimately grow to nearly $400 billion. “Unfortunately, today, years after they were forced out of the company for their misdeeds, [former Fannie Mae CEO] Franklin Raines and his management team have continued their abuse,” Rep. Randy Neugebauer (R-Tex.), the chair of the investigations subcommittee, said in prepared remarks. “This time, however, it is against the US taxpayers.”

Many of Fannie Mae’s legal headaches stem from a major accounting scandal in 2004. The company’s then-regulator, the Office of Housing Enterprise Oversight (OFHEO), found that between 1998 and 2003 Fannie executives “deliberately and intentionally” falsified company earnings statements, inflating them by $11 billion. The result: Top Fannie managers pocketed $115 million in bonuses they shouldn’t have received. Freddie, too, has faced its share of legal battles, including securities lawsuits and federal probes.

But in defending themselves against fraud charges stemming from the accounting scandal, Fannie’s top brass have vastly overspent on their legal team and defense strategies, according to prepared remarks of Rep. Neugebauer and Ohio attorney general Mike DeWine, who’s testifying at Tuesday’s hearing. DeWine is currently litigating a fraud suit on behalf of Ohio’s pension funds for public employees and teachers; the plaintiffs in Ohio’s suit against Fannie amount to nine million Ohioans. DeWine describes Fannie’s legal defense team as a “circus” in which 35 to 40 attorneys and paralegals will turn out, even for routine conferences. DeWine’s team, by contrast, will bring just three attorneys to the same meetings.

In another instance, Fannie brought 13 attorneys to the deposition of former CEO Raines, and not a single one of them asked a question, DeWine says. “They just sat there and billed the taxpayers for their hours,” he says.

All that overstaffing, DeWine says, has caused his lawsuit against Fannie to drag on far longer than necessary. “It’s really easy to hold up the resolution of a lawsuit when you’ve got a seemingly bottomless coffer of US taxpayer dollars from which to pay your legion of lawyers to engage in wasteful delay tactics,” he argues. Even the judge on the case, Richard J. Leon, the US District Judge for DC, commented in June 2009: “I am not so sure the taxpayers are doing pretty well, but the lawyers are doing well in this deal.”

DeWine also describes how Fannie’s legal team loads up on far more experts than it could ever need in its defense, at a cost of $600 to $1500 an hour to taxpayers. At a June 2010 hearing, Judge Leon went further in bashing Fannie’s legal team for its excessive tactics. “You don’t need to have five experts say the same damn thing,” Leon said. “It is not a ‘me too’ operation…The costs are just staggering.”

Near the end of his prepared remarks, DeWine blasts Fannie for its “flagrant practices” and calls Fannie’s “feeding frenzy” a scandal “bigger than Enron.” DeWine concludes, “Realistically, there are ways for Fannie Mae and its former officers to to put up a defense without being so wasteful.” The sheer size of the company’s legal bills so far, he says, “is, in a word, ridiculous.”