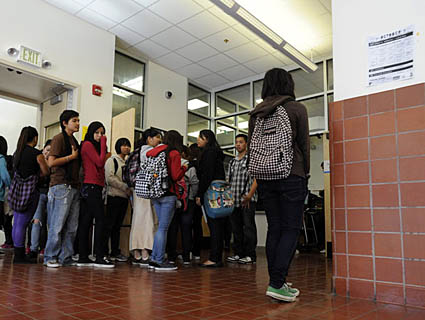 Amadis Velez, a history and English teacher at Mission High School, is in the middle of a heated Spanish conversation with one of his students when I arrive. Apparently his student, Lourdes, has just received an invitation to do an interview with Harvard University. But she doesn’t want to go. “How is that possible?” I ask Velez.

It turns out that Lourdes is an undocumented student—one of at least eight undocumented teens in Velez’s class, and roughly 2.5 million undocumented minors in the US. She lives with the daily fear of being deported. (PDF) In San Francisco, and in this school, she can temporarily tune out that anxiety, Velez explains. In Cambridge? Maybe not. “Harvard and Stanford are the only two places I know of where undocumented students get a full ride,” Velez tells me later. Will Lourdes give Harvard a chance? Velez doesn’t know for sure. In fact, only an estimated 20 percent of undocumented students enroll in college. (PDF) Velez is famous at Mission High for his dedication to sending more undocumented high school seniors to college.

In today’s class, as in every other class Velez teaches for seniors, he will go over important deadlines for college applications and scholarship deadlines first. But before he gets started, he has an announcement.

“Eman* got accepted to the State University of San Francisco, everyone!” he says, pointing to a student near me. Eman’s wearing a blue Hijab with silver stitching around the edges and smiles shyly as the class erupts into applause and who-hoo-ing.

I recognize another student near me from choir, a teen who moved here from the Philippines a year ago, and ask her if she applied to college anywhere. “Yes! I applied to eight UC campuses, the University of San Francisco, and the University of Southern California,” she tells me. She’s hoping to get into USF. “I heard they have a great nursing program,” she says.

Next, Velez spends 10 minutes talking to class about the Meritus College Fund, a local scholarship fund that awards $12,000 college grants to low-income students from San Francisco. “Maria, how many hours would you have to work to make this much money at your job at Hot Topic?” Velez asks. “One year,” Maria says. “See! And you can make this in two hours of your work doing this application. Now, that’s a really good deal,” Velez says. This gets everyone’s attention.

“Do they need letters of recommendations?” Jakob wonders. “Three of them,” Velez responds, and Eman clasps her face in panic. “One of them can’t be from your teachers.” “Where am I going to get that?” Jakob looks upset. “Think of anyone who knows you really well: club advisor, coach, someone in your church.” “Can my bus driver do it?” a student from the back yells out, and everyone bursts out laughing. “Jakob, he comes to the bus every day on time,” Jacob responds and laughs.

As Mr. Velez finishes reviewing the application process, I think about how Velez reminds me of Manuel Gonzalez, the community college history professor who changed my life. “Manny” was my Mr. Velez when I moved to the United States from Latvia in 1994. Back then I worked full-time as a property manager and went to a community college in the evenings. By 22, I had finally saved up enough money to go to community college classes full time. “Every single one of you can transfer to a UC,” Manny told us in his class almost daily. “I’ll teach this class in the same format as they do at UC Berkeley, so you’ll be well prepared and ready to hit the ground running when you get there.”

Manny—like Velez for some of his students—was the first person in the US who said I should go to the best schools. He worked our asses off in the classes: challenged us to ask a lot of questions, defend our views in public even though most of us had thick accents and often didn’t use the right words, made us rewrite our papers until he said they were as good as those at UC Berkeley. He also praised us constantly and took us out for pizza. When the time came, he helped me write my college applications and personal statements.

Suddenly Velez turns to me. “Kristina, you are an immigrant,” he says. “What do you think about the rules in this country?”

“Well, the most useful advice I got from my counselor at UC Berkeley when I arrived there as a starry-eyed community college transfer is to ‘Never take ‘no’ for an answer no matter what they tell you,'” I recall. “For every five people who say ‘no,’ there is one who’ll say, ‘yes,'” he told me. Human beings are flexible.”

Editors’ Note: This education dispatch is part of an ongoing series reported from Mission High School, where education writer Kristina Rizga is embedded for the year. Previous Mission High dispatch: What happens to class dynamics when the star student stays home?