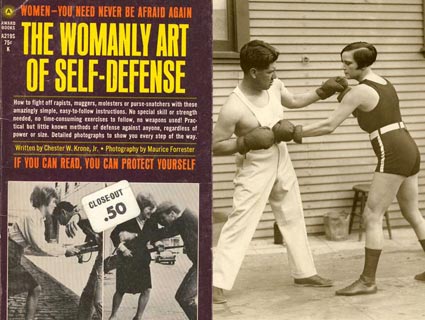 So you’re lying on the floor with your eyes closed, and all of a sudden a guy pins your arms to your side. When your eyes flash open and you start to struggle, he holds you tighter and barks, “Behave!” You do, because you haven’t figured out what else to do, and because he’s put all his weight on top of you and put his nose to yours. His fingers are tight around your wrists and he’s crushing your chest, and you go completely limp.

This non-response response is called Going To Zero. It can be a self-defense strategy if you use it to plan your next move, a fake out. But in this particular case you have just been paralyzed by the awfulness of what’s happening and his breath on your face. “You thought you were tough, didn’t you?” he coos. “But look at you now with your weak, hot ass.”

It’s the second eight-hour day of my full-force personal-safety course, an emotional- and physical-self-defense primer on deescalating unwanted advances and surviving a sexual assault. We’ve come to the So You Are In The Incredibly Unfortunate Position Of Being On Your Back And About To Get Raped module. Here’s how to snap out of Going to Zero: Wait for your assailant to start strangling you so you can grab your elbows above your head and then clamp down, trapping his forearms against your chest hard enough to knock the wind out of yourself but long enough to roll him off, walk your way up his body, then kick him in the face. Or wait for him to pull your pants all the way down to your ankles so you can kick him in the face. Pretty much all your options lead to a dirty ground fight in which you’ll have to free your legs from his grasp with a move called “pistoning” so that you can land enough heels on his (in this case, elaborately padded and protected) head to knock him out.

That’s assuming you can ever break out of the paralysis, a physiological crisis response generally referred to as “freezing.” It’s hard as hell to beat once it’s been activated. And most women, research shows, can be instantly intimidated into freezing with just shit-talking. That’s why the guy climbing on top of me was being so mean. As unpleasant as it was to be under him, though, that’s got nothing on watching it happen to the 12 other women in the class.

One of the students is probably in her midfifties, like my mother but much shorter and frailer. She goes perfectly still when the big young guy pins her arms and mounts her. He says gently, assuredly that she’s going to like what he has for her, rolling her slowly over onto her stomach. When he pushes her legs apart with his knees, telling her to “relax, you disgusting slut,” settling his groin in between them with a low and satisfied groan, something inside my chest crumples. It’s not that we’re all rape survivors here; plenty of us aren’t. But for the better part of an hour, we all watch and cry silently as the horror repeats over and over on the floor in front of us.

But let’s back up to the main reason I’m here. According to some studies, a woman who fights against a sexual assailant has a much higher chance of not getting raped. The folks at Impact Bay Area, who run this course, and other experts say that forceful engagement can be applied to many situations with a potential enemy. People, like dogs or mountain lions, are generally less likely to confront a strong and active target.

Unfortunately for journalists, putting yourself in threatening situations is often the name of the game. Often it means opening up personal boundaries enough to get your sources comfortable and talky. And unfortunately for me, my response to the sudden explosion of the boundaries I’ve deliberately been pushing is, like many people’s, and most gals’, to freeze. Say I’m hanging around a house in the Oklahoma Indian Nation in the middle of the night with a bunch of extremely drunk men who beat people up for money and/or have been charged in the past with beating someone to death for fun at a party. Say the festivities get out of hand when their talk turns to how I’d be fun to pass around for some lively sex. It takes me too long to tell them to shut the fuck up, because I’m stuck in a shutdown where all I can think is that I really wish this weren’t happening right now. My hesitation is enough to fuel their bad behavior, which then gets handsy, which then drives me out into the rural darkness with hopes that I am resourceful enough to safely find a way back to a town and hotel.

According to some studies, a woman who fights back has a much higher chance of not getting raped. People, like dogs or mountain lions, are less likely to confront a strong and active target.

This is the sort of scenario my customized verbal-deescalation drills are modeled on. One of them involves a guy pretending to be a translator who starts an argument with me about my refusal to have sex with him while reminding me that he knows where I sleep. This is a good scene to practice, because the next time this happens it’s likely there won’t be a guy with a gun nearby whom I can offer $500 to intimidate the translator into going away. My mock harasser and I start in friendly conversation. It turns ugly as he eventually asks me when we’re going to screw, and persists, and persists, saying that plenty of American gals put out, and that I’ve been acting like I was going to, and it’s time, and I’m hot, so what’s the problem? And I say, “No, no, I already said no, we’re just friends and this is totally inappropriate.”

I hate this role-play so much that even my body language is trying to escape the situation: I’m standing at a 90-degree angle to the guy. An instructor has to put her hands on my shoulders and turn me toward him, because I’m physically incapable of facing him straight on though she is standing there saying, “Hold your ground. Hold your ground.” It’s not until I do so, and raise my voice forcefully enough to make my “This conversation is over” or whatever sound true enough to be believed, that he says “Fine,” and leaves.

I win! I am free to rejoin my place in the audience. The adrenaline and memories have made me so sick to my stomach that I inch away in case I have to bolt to go throw up. The next time it’s my turn, I’m able to fully face him and bark him down faster, and I’m slightly less nauseated. Which is good, because this time, the instructors have decided that after I talk my way out of that threat, I will immediately suffer an attempted kidnapping by a different guy who attacks me from behind as the other is walking away. I’m stunned for a second as my body absorbs the impact of his weight slamming into my back, but as he picks me up in a bear hug I manage to break free. Though I knock him to the ground with a couple of blows, he grabs me as he goes down and takes me with him. Then it’s another one of those dirty ground fights, with the kicking and scrambling and an instructor having to reprimand me for instinctively trying to escape at one point, because in this hypothetical scenario, I’ve got no safe place to go and so have to continue fighting until one of us gives up.

After 16 hours of high-adrenaline training, I’m still far from perfect. Though the point is to get my body so used to verbal or physical attack that I’ll unfreeze in about a second—enough time to react in a game-changing way—I still sometimes lapse into terrorized immobility. In an exercise toward the end of the day, I’m walking across the dojo when an assailant runs up behind me and picks me up with the one arm he’s wrapped around my neck in a stranglehold. I can’t remember to turn my face into the crook of his elbow, a superhandy trick if you’re interested in continuing to breathe. One of the instructors has to holler at me over the sound of my own choking to remind me to do it.

Next Sunday, we’re doing more of the same awfulness, plus some new fighting techniques. And “extended” fights, where you get to practice a struggle with an assailant who just…won’t…quit. Usually only one of your blows has to be hard enough to knock out the mock attacker; these fights require you to land five or seven knockout blows. As my instructor describes it, they “are meant to simulate scenarios where the assailant is either on a psychotic break or high, and thus not receptive to a ‘pain knockout’—and requiring a ‘structural knockout'” (as in, he must be kicked or punched in the head in a way that his brain knocks against the skull hard enough for him to lose consciousness). “They are also meant to provide students the opportunity to continue fighting even though exhausted, so that you know you are capable of doing so. And, because we don’t hit students in our class, fighting through that exhaustion is the closest we can get to safely giving you the experience of fighting back through pain or shock if you were hit in a real life scenario.”

Isn’t it fun to live in a world where this is necessary?