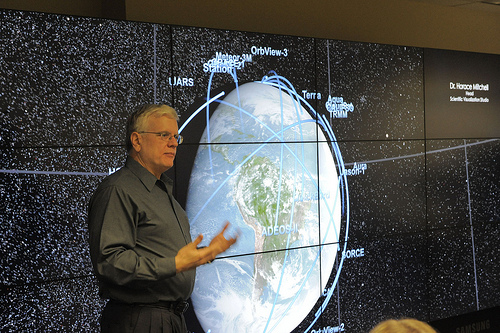 The spending plan the House GOP was supposed to roll out on Thursday included a number of cuts meant to prevent the Environmental Protection Agency from doing anything about climate change. But Republicans had to take that plan back to the drawing board Thursday night after tea party members claimed the package of cuts didn’t go deep enough. And if a trio of House members get their way, we won’t ever have to worry about the climate—since we won’t know what’s happening with it, anyway.

This week, Reps. Bill Posey (R-Fla.), Sandy Adams (R-Fla.) and Rob Bishop (R-Utah) called for a budget that would “reprioritize NASA” by axing the funding for climate change research. The original cuts to the budget outlined yesterday would have cut $379 million from NASA’s budget. These members want climate out of NASA’s purview entirely, however. Funding climate research, said Adams in a statement, “undercuts one of NASA’s primary and most important objectives of human spaceflight.”

The total budget request for NASA for 2010 was $18.7 billion. Of that, just $1.4 billion was for its earth science division. The agency’s climate programs—which include modeling and satellite monitoring—are a subset of that. They are responsible for monitoring data that is crucial to our understanding of how our planet works—ocean temperatures, sea level, the ozone layer, sea ice, and, of course, how carbon dioxide emissions are affecting the atmosphere. The increase in funding requested for climate last year was intended to make up for cuts to the program under the Bush administration. But even with that proposed increase, the earth science program accounted for a mere 7.5 percent of NASA’s total budget.