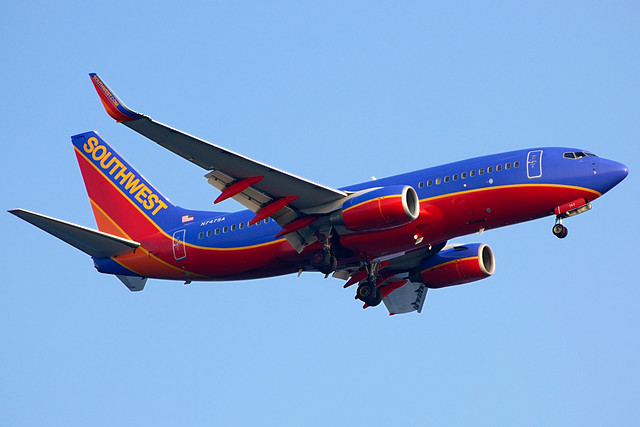 In what language do sneaky, foreign Islamic terrorists speak to each other? English, of course. That’s what a Southwest Airline crew member must have thought when she flagged 31-year-old graduate student Irum Abbasi as “suspicious” and had her kicked off the plane. Abbasi, a US citizen who was born in Pakistan, was on the phone with Verizon shortly after boarding the the Southwest flight. As is regulation, she had to get off the phone before the airplane could take off. So she told the Verizon agent, “I’ve got to go.”

A Southwest Airline crew member thought the headscarf-clad Abbasi had said, “It’s a go” and suspected there might be a terrorist plot afoot. Why she thought a terrorist who wanted to keep her plans secret would give the “go” signal in English for everyone to hear is a mystery. And I don’t know if the phrase “It’s a go” would have been seen as terrorist lingo if it came from someone who didn’t have an accent or wasn’t obviously Muslim. But regardless, the flight attendant was sufficiently freaked out that the captains of the plane heeded her judgment call and ordered Abbasi taken off the flight. After talking with TSA agents and having her headscarf patted down, Abbasi was cleared to board the next flight. She was later given two apology from the airline and a travel voucher.

Abbasi is still upset, however. She wants the Southwest crew member who ordered her detention to be held accountable. And given the circumstances, I can’t say I totally blame her. It seems that the flight attendant was the only one with security concerns about her. “They did not question me. I even handed over my purse and cell phone for inspection and they didn’t even touch it,” Abbasi said. Abbasi, a mother of three, says “This time they said we weren’t comfortable with the head scarf. Next time, they won’t be comfortable with my accent or they won’t be comfortable with my South Asian heritage.” Southwest has said it’s looking into the matter, but hasn’t said if discipline will be in order.

Southwest spokesperson Chris Mainz said, “”We treat all our customers the same and we think all of our employees do a very good job of that.” People have been kicked off Southwest for having being too thin AND being too fat, so there may be some truth to that. The airline can also be quite hypocritical: they kicked Kyla Ebbert off a flight for dressing too sexy, then painted a bikini-clad model on a plane as part of a Sports Illustrated promo.

Similarly, the airline says it is committed to equality and has hired Muslim pilots, but it also appealed $27.5 million in damages awarded to a woman of Iranian descent who successfully sued the company for racial profiling. In that case, three flight attendants found passenger Samantha Carrington, an economics professor, “suspicious”-looking and claimed she was verbally abusive, physically assaulted a crew member, and threatened to storm the cockpit. As a result of their claims, Carrington had to spend a night in jail. However, Carrington never faced criminal charges because the investigating FBI agent couldn’t find enough truth in the attendants’ story to merit them. Carrington said she had only complained about poor service during the flight, and sued Southwest. During the trial, it came out that one of the attendants had said Carrington “reminded her of a terrorist.” The court ruled in Carrington’s favor, but Southwest appealed and the two parties later settled out of court for an undisclosed sum.

It’s not known what happened to the flight attendants involved, but Carrington (who, like Abbasi, is a US citizen and lives in California) has still not been able to remove her name from terrorist watchlists.