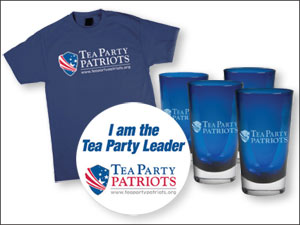 In April 2009, Barry Cole attended the Tax Day Tea Party in his hometown of Wichita, Kansas. An entrepreneur whose ventures include a company that calibrates police radar guns, he immediately “saw there’s a potential market developing here.” Within a week, he’d applied for a trademark (PDF) for the name “Teaparty Patriot” and arranged to sell T-shirts, flags, pins, license plates, and other gear on eBay and another website.

Eight months later, he got a cease-and-desist letter from a lawyer representing Tea Party Patriots—a group that now claims to be one of the largest tea party groups in the country—who accused Cole of committing a trademark violation.

“I laughed,” says Cole. “It was absurd. I filed for a Teaparty Patriot trademark three months before they did.” After a year of legal wrangling—during which Tea Party Patriots failed to respond to numerous requests for documents—TPP abruptly dropped the matter (PDF) in late November. Cole, meanwhile, is still awaiting word on his “Teaparty Patriot” (no “s”) trademark application. TPP, whose site also has a full line of swag including golf towels and cigars, is still seeking approval (PDF) to own the term “Tea Party Patriots.”

The Cole/TPP battle is not the only fight over control of the Tea Party Patriots brand. TPP has sought to wrest domain names away from a radio host in Orlando (teapartypatriots.com) and a motorcycle-riding multi-media producer in Washington state (teaparty-patriots.com). It has sent a cease-and-desist letter to Zazzle, a website whose users can make and sell personalized merchandise, because a Georgia tea party group was selling its gear there. And the organization is embroiled in a thicket of legal actions against former board member Amy Kremer, who now chairs Tea Party Express. In 2009, TPP won a restraining order (PDF) barring Kremer from using the Tea Party Patriots name, trademark, domain name, and especially its most valuable asset—its email list. She has countersued (PDF) for slander and also opposed TPP’s trademark application, on the grounds that she put the term into circulation months before TPP was incorporated.

All these cases likely have cost TPP a fair amount of time, bandwidth, and money—money, its critics say, that could otherwise be used to spread the gospel of smaller government. Cole blames TPP national coordinator Mark Meckler, a self-described “internet marketing attorney” who was previously a distributor for the multilevel-marketing company Herbalife.

“I am conservative,” notes Cole, “but you know, you just want to think that an organization that’s supposed to be like that would be more representative of the people.”