The oil giants—BP, Chevron, ConocoPhillips, Exxon Mobil, and Shell—recently released their first quarter reports. Together, the big five’s profits were 38 percent higher in the first quarter of 2011 than the same period last year. A new report from the Center for American Progress finds that several of these companies used quite a bit of that extra money to buy back shares of their own stock, increasing the value of their shares and enriching their shareholders, boards of directors, and senior managers at a time when most Americans are dealing with extremely high gas prices.

ConocoPhillips, Exxon Mobil, and Chevron spent the most on share buybacks in the first quarter. Here’s what that looks like: 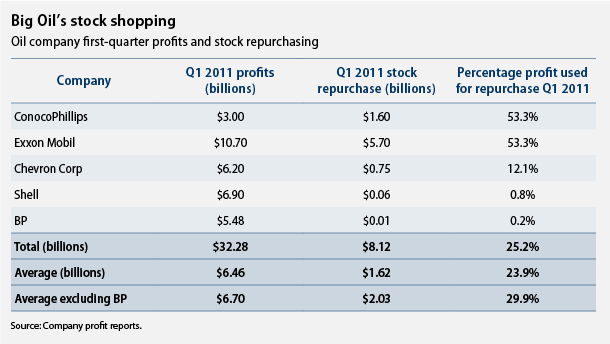 This spending spree comes not only as the gas price debate has resurged in Congress, but also as companies lobby to keep the $40 billion in tax breaks and loopholes that President Barack Obama and congressional Democrats want slashed from the 2012 budget.