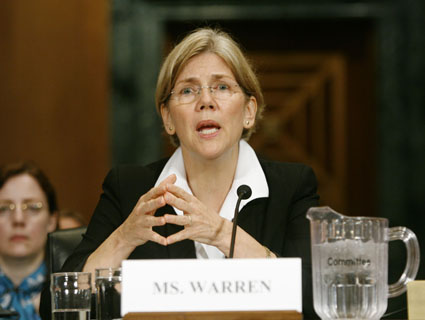 At the hearing, House Republicans, and Rep. Patrick McHenry (R-NC) in particular, accused Warren of lying to Congress about her role in the settlement negotiations between mortgage servicing companies and state attorneys general. Warren has repeatedly described her role as an advisory one: “We gave advice when asked.” House GOPers, however, continue to claim that she has unduly influenced the settlement talks, and then lied to Congress about the extent of her role in previous testimony.

Then the hearing got really ugly. At around 2:15 p.m., Warren said her time was up and she had to go, based on what McHenry’s staff had told her staff. McHenry said that wasn’t the case, and then accused Warren of lying again, this time about the hearing schedule.

It’s worth noting that Patrick McHenry questioning someone else’s integrity is as hypocritical as it gets. This is, after all, the guy who created a phony realty company before his initial run for Congress so that he could later say he was the “one small businessman in the race,” as the Washington Monthly reported.

Now McHenry’s facing some blowback for his specious attacks on Warren. Just take a look at his official Facebook page. You’ll find comment after comment demanding McHenry apologize and ripping him for calling Warren a liar. Here are just a few:

“Mr. McHenry, you should be ashamed for your behavior. You are a disgrace to NC, the House of Representatives, and human kind in general.”

“Just because you don’t agree with someone politically, does not allow you to treat them disrespect. Ms. Warren carried herself with dignity and showed you respect. You, on the other hand, treated her with hostility and disrespect.”

“Your treatment of an incredibly smart and strong woman was reprehensible. Ms. Warren represents the interests and people of this country better than you do. I despise that I had to “like” your page so I could tell you off. I’ll be happy to financially contribute to your opponent this cycle.”

“This is your ‘macaca’ moment, Congressman. Enjoy!”