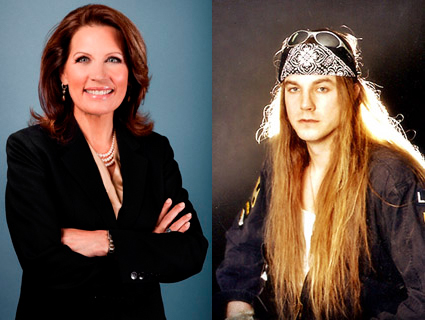 Photos Courtesy of Rep. Michele Bachmann/You Can Run But You Cannot Hide International

In late September, Rep. Michele Bachmann (R–Minn.) will travel to a greyhound racetrack on the outskirts of Kansas City, Kansas, to speak at the Freedom Jamboree, a five-day festival billed as “the first national nominating convention” for the tea party. Bachmann, who is considering a run for president, will be joined by some familiar faces—WorldNetDaily editor and arch-birther Joseph Farah will be there; so will Kansas Secretary of State Kris Kobach, the architect of Arizona’s harsh immigration law.

One confirmed speaker, however, is not like all the others: Bradlee Dean is a Minnesota radio host, anti-gay activist, and drummer for the band Junkyard Prophet, voted “the second-best unsigned band in the nation” in 1996 by Heaven’s Metal magazine. Dean is likely the only scheduled speaker with a tattoo of Abraham sacrificing Isaac on his forearm; he is almost certainly the only scheduled speaker who has ever gone more than a decade without cutting his hair—a lifestyle decision that gives him a more-than-passing resemblance to Poison’s Bret Michaels.

But over the last five years, Bachmann, the politician, and Dean, the metal-head, have formed an unlikely but powerful alliance. Bachmann has helped raise money for Dean’s traveling youth ministry, You Can Run But You Cannot Hide International; guest-starred in his television series; and prayed for his ministry to multiply 10-fold. Dean, for his part, has embraced Bachmann, whose district includes his suburban community of Annandale, as an ally against the gay agenda. But his inflammatory rhetoric and past links to an anti-government organization make Bachmann’s own controversial views seem downright pedestrian—and raise serious questions about the congresswoman’s choice of associates.

A staunch social conservative, who found his calling after one-too-many close calls with hard drugs, Dean’s ministry travels to public schools across the country to perform what it calls “shock treatment.” After an opening performance from Junkyard Prophet—”the type of music your kids can relate to”—Dean delivers his faith-based pitch to students, on topics ranging from alcohol, to abortion, to pornography and “impure thoughts.” As the Minnesota Independent has chronicled extensively, You Can Run But You Cannot Hide’s performances have sparked walkouts from students and public apologies from school administrators, who thought they were spending $1,500 for an anti-drug lecture. (As one student put it, “It seemed like total propaganda. It was like a cult.”)

On his radio show, Dean has alleged that gays were responsible for the Holocaust, and that gay men will, on average, molest 117 people “before they’re found out.”

Dean reserves his most incendiary rhetoric for gays, whom he believes are actively working to undermine the Constitution. He’s argued that homosexuality is not only immoral, but actually a federal crime. When President Obama nominated Sharon Lubinski, who is openly gay, to be a US Marshal in 2010, Dean argued that Obama had acted illegally because “homosexuality is against the law in the United States.” (Although some states have refused to take the laws off the books, the 2003 Supreme Court case Lawrence v. Texas ruled that homosexuality statutes were unconstitutional.)

On his radio show, he’s alleged that gays were responsible for the Holocaust, and that gay men will, on average, molest 117 people “before they’re found out.” He’s also suggested that extremist Muslims who call for the execution of American gays are morally justified. “If America won’t enforce the laws, God will raise up a foreign enemy to do just that,” Dean explained. “[Homosexuals] play the victim when they are, in fact, the predator.” He has since clarified that he does not support executing gays, and that his remarks were intended as a brotherly warning to gays to change their ways.

Although he portrays himself as a spirited defender of the Constitution, going so far as to offer a 12-week Constitution study class for $240, his past association with an anti-government group calls that into question. Until 2010, Dean was a member of Oregon-based Embassy of Heaven, a self-described “Christian Patriot” organization which subscribes to Sovereign Citizen ideology—the idea that citizens are themselves sovereign nations and therefore not bound to the laws of the United States.

Scott Roeder, the anti-abortion extremist who murdered Dr. George Tiller at his Wichita, Kansas church in 2009, was a member of Embassy, which makes money by selling fake license plates and passports. As part of his membership in the group, Dean signed a statement “renouncing his allegiance to the world and declaring citizenship in the Kingdom of Heaven” (he did, however, continue to pay taxes). The group has been identified as an “anti-government group” by the Department of Justice.

In March, authorities arrested five Alaska sovereigns who were allegedly involved in a plot to murder state troopers and a federal judge.

Bachmann saw Dean’s ministry not just as an everyday force for good, but as a potentially transformative vehicle.

Bachmann, through all of this, has publicly supported Dean’s outreach, which dovetails with her own efforts to promote faith in public schools. During her first congressional campaign in 2006, she led a prayer for Dean’s ministry at a Minneapolis hotel. “Lord, I thank you for what you have done with this ministry,” she said, in a recording obtained by the Independent. “I thank you for how you are going to advance them from 260 schools a year, Lord, to 2,600 schools a year. Lord, we ask by faith that you would expand this ministry beyond anything the originators of this ministry could begin to think or imagine.”

Bachmann saw Dean’s ministry not just as an everyday force for good, but as a potentially transformative vehicle. “I thank you, oh God, that you are literally right now by faith you are lighting a fire,” she continued. “A fire of the gospel, that would sweep this city, but even more so that it would sweep Minnesota. And that Minnesota would just become a burning incense. A sweet smelling incense of praise and sacrifice into your kingdom. So thank you now for this time. And pour a double blessing, Lord, a triple blessing onto this ministry.”

Three years later, in 2009, she delivered a video address to the group’s $50-a-plate fundraiser in Bloomington, reportedly telling the ministry, “It a tough job that you do, but someone has to do it.” (At the same event, Dean said Christians were “called to war” to preserve the nation).

Dean is no party hack. As Matt Labash noted in a 2006 Weekly Standard profile, he was critical of President Bush (calling him a “punk, lyin’ stinkin’ kid”) and believes Dick Cheney will end up in hell. Dean also shares many of the kinds of fringe views that make Bachmann such a polarizing figure within her own party.

For instance, they both have a mind for paranoia. On his radio show, Dean has alleged that members of his ministry are being stalked by helicopters, and suggested to Labash that the moon landing was a hoax—a theory he briefly introduced to public school students as part of his stage routine. Bachmann, for her part, has suggested that, among other things, President Obama will force youths to attend “re-education camps.”

Bachmann’s anti-gay activism isn’t confined to her relationship with Dean. She has previously called homosexuality a “sexual dysfunction,” and recently refused to say whether she thinks being gay is a public health risk akin to second-hand smoke—a view held by the Family Leader, an Iowa social conservative group she supports. In a bizarre 2005 incident, Bachmann alleged that she had been held against her will by members of an LGBT group, in a women’s restroom in Scandia, Minnesota. The Minneapolis City Pages alleged that her husband, Marcus, was active in the ex-gay movement, which seeks to convert gays through psycho-therapy (a charge Mr. Bachmann denied).

Bachmann did not respond to a request for comment. Dean declined an interview request, explaining through a spokesman that he “doesn’t want to be used to shame Michele Bachmann in any way.”