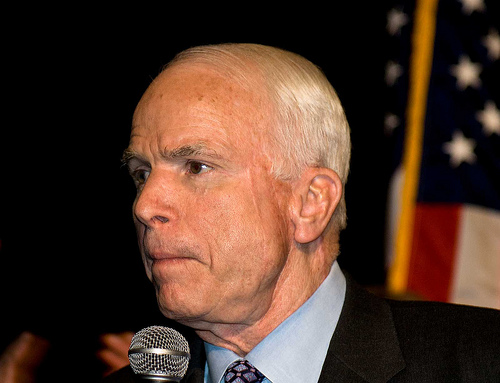 Always the foreign-policy hawk, Sen. John McCain (R-Ariz.) on Sunday ripped the Republican Party’s presidential hopefuls for their “isolationism” and  weak responses when asked about the nation’s wars in Iraq, Afghanistan, and Libya. Appearing on ABC’s This Week, McCain said former President Ronald Reagan would look poorly upon the GOP candidates’ foreign policy positions. “He would be saying: That’s not the Republican Party of the 20th century, and now the 21st century,” McCain said. “That is not the Republican Party that has been willing to stand up for freedom for people…all over the world.”

It’s time for us to bring our troops home as soon as we possibly can, consistent with the word that comes to our generals that we can hand the government over in the way the Afghan military to defend themselves from the Taliban. Our troops shouldn’t go off and try and fight a war of independence for another nation. Only the Afghanis can win Afghanistan’s independence from the Taliban.

Gingrich also struck a decidedly un-GOP tone at the debate, saying that US leaders “need to think fundamentally about reassessing our entire strategy in the region.” And in an interview with Esquire magazine, Huntsman said Afghanistan is “a tribal state, and it always will be. Whether we like it or not, whenever we withdraw from Afghanistan, whether it’s now or years from now, we’ll have an incendiary situation… Should we stay and play traffic cop? I don’t think that serves our strategic interests.”

McCain was joined in his criticism by fellow GOP senator and close ally Lindsey Graham of South Carolina, a lawmaker equally hawkish when it comes to America’s wars in distant lands. Here’s Reuters:

Asked on NBC’s “Meet the Press” if he’s fearful “that there is an isolationist streak now running now through the Republican Party, Graham said, “Yes.”

“If you think the pathway to the GOP (Republican) nomination in 2012 is to get to Barack Obama’s left on Libya, Afghanistan and Iraq, you are going to meet a lot of headwinds,” Graham said.