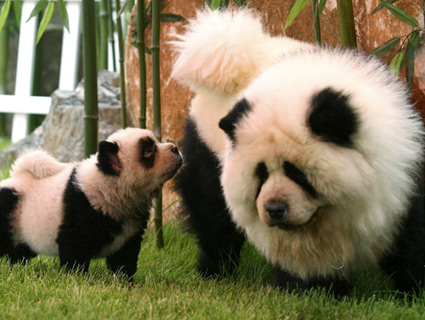 The Chinese have surpassed us as the world’s biggest auto market, bested us at the renewable energy game, and are years ahead of us on high-speed rail technology.

Now they’ve beaten us to the “Panda Dog.”

There’s a new fad among Chinese pet owners that involves taking your domesticated canine to a grooming salon and having it washed, trimmed, and dyed to resemble an exotic animal. Think fluffy chow-chows as baby pandas and golden retrievers as mini-cheetahs or micro-tigers.

Photos currently making the rounds on the blogosphere include images from a dog pageant in China’s Henan Province. The dogs on display look confused and not particularly ecstatic.

This follows a rising trend in China that encourages extreme pampering of house pets, according to the Daily Mail:

Recent figures show money spent on pets across the nation has seen nearly a 500 per cent increase between 1999 and 2008—but, arguably, at the cost of their pets’ dignity. Quite what the animals might think about it is another matter.

Since Americans can potentially be fined hundreds of dollars for just coloring their dog’s feet pink, this seems, at least for now, to be a strictly Chinese market. Lucky them?