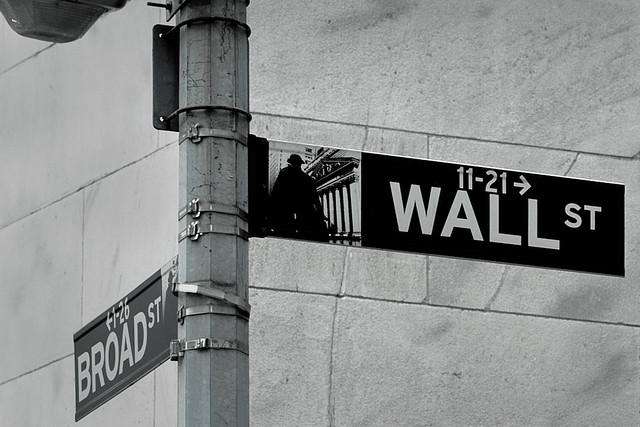 Despite resurgent profits among the titans of finance, Wall Street is slimming down. As the New York Times‘ Dealbook reports today, heavyweights like Goldman Sachs and Bank of America are shaving operating costs and planning to lay off employees. Morgan Stanley, the Times says, could jettison at least 300 brokers and cut $1 billion in expenses not related to pay.

For the well-heeled denizens of big finance, that’s bad news. For the rest of America, it could be cause for celebration.

Here’s why. Over the past two decades, we’ve witnessed the “financialization” of America, in which Wall Street and the banking sector have gobbled up an ever-greater share of American wealth. As economist Henry Kaufman has noted, the ten largest financial institutions controlled 10 percent of financial assets in the US in 1990; by 2008, their control had grown to a whopping 60 percent. And when Princeton economics professor Hyun Song Shin studied the flow of cash in the American economy, he found that, between 1954 and 1980, nearly all sectors grew tenfold. That trend continued from 1980 to 2008, but with one major exception: the securities industry grew 100-fold, largely thanks to the deregulatory frenzy presided over by Reagan, Clinton, and Bush I and II. As my colleague Kevin Drum pointed out, by the mid-2000s financial industry profits had spiked to 40 percent of all corporate profits in America, while Wall Street pay had doubled and bonuses sextupled.

Drawn to that wealth were some of the brightest minds to graduate from America’s top universities. The best engineers and scientists weren’t necessarily designing solar panels or building the best electric cars; they were working as high-paid “quants,” algorithm-writing mathematicians, and high-frequency traders on Wall Street. Granted, the flow of graduates to jobs in finance lessened during the recent financial crisis, but there’s no doubt Wall Street remains an enticing and lucrative option for the best and brightest. As Harvard economist Benjamin Friedman lamented, “It’s all the more troubling when I think that, after [students] leave us, so many of them go into activities that are not economically productive for the country, for society, even, just narrowly, for the economy.”

So the news that Wall Street is trimming its ranks, whether prompted by the European debt crisis or the fear that aspects of the Dodd-Frank law might pinch the financial industry’s profits, is perhaps an early sign of waning influence, a modest rolling back of the financialization trend. Maybe the coming years will see big finance relinquish some of its grip on American wealth while still doing the important work of allocating capital when needed. Or maybe it’s a temporary blip, an aberration. Either way, with ordinary people still stinging from the pain of the financial crisis, it’s obvious that an economy controlled by Wall Street is an economy that simply doesn’t work for most Americans.