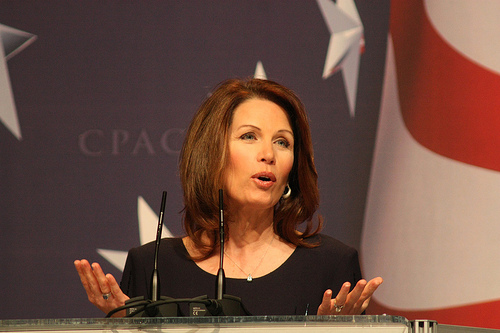 Declaring that “[u]nmistakably, the Institution of Marriage in America is in great crisis,” the document states:

Maybe they should get a bit of credit for acknowledging that slavery was “disastrous” for black Americans. But that passage seems to suggest that maybe things actually were better for black Americans then. Yes, being kept as property, forced into marriages arranged by slave masters, and raped by those masters was great for black people. As Jack & Jill Politics also points out, breaking up families to sell off slaves was hardly pro-family values. It’s an insensitive comparison that ignores history.

Bachmann’s campaign has not responded to a request for comment about this particular line in the pledge.

The pledge, which is being promoted by Family Leader president and former Mike Huckabee ally Bob Vander Plaats, asks GOP candidates to committee to 14 vows, including “personal fidelity to my spouse,” rejection of Sharia law, and “earnest, bona fide legal advocacy” for the Defense of Marriage Act. So far, Bachmann is the only candidate to sign on.

UPDATE: We asked the NAACP about the controversial pledge, and Bachmann’s decision to sign it. “It is outrageously insensitive and without factual merit,” said Hilary Shelton, senior vice president for advocacy and policy at the NAACP. “To say that the conditions African Americans are living under today are somehow worse than the conditions under slavery ignores the factual reality that they were bred to be sold … It’s certainly a misrepresentation of our nation’s history and the horrors of slavery.”