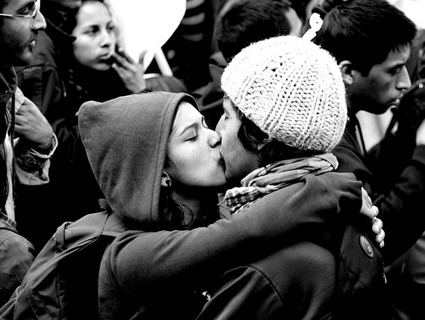 While Chile’s recent string of student protests has had its fair share of water cannons sprayed and Molotov cocktails hurled, there have been a good deal of bloodless—and downright entertaining—demonstrations as well.

Batman, Superman, Mario, Wonder Woman, Catwoman (who actually looked more like Lady Gaga on a bad morning), Poison Ivy, and a few jolly pirates all made appearances, while C+C Music Factory’s “Gonna Make You Sweat” was blasted for good measure.

The protest—the latest in a series of demonstrations that began in June—was organized after news of a cabinet reshuffle by center-right President Sebastián Piñera, whose approval rating has sunk to the low-30s.

Chilean students appear to have a fondness for creative protesting. In early July, students in Concepción orchestrated a mass “kiss-in,” in which 2,000 demonstrators gathered in front of city courts to suck face in support of eliminating for-profit control of their education system. (It was kind of like a larger, less chaotic version of the osculating couple photographed during the Vancouver Stanley Cup riots.)

The only thing that would have made either of these rallies more stimulating was if the Chileans took a cue from Ukrainian protesters and went topless.

Watch footage of the superhero-dance-protest below: