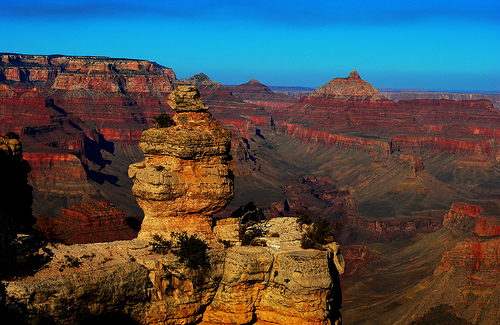 Last month, Secretary of Interior Ken Salazar cheered environmentalists and fans of the great outdoors with his extension of a moratorium on uranium mining near the Grand Canyon for another six months. But now House Republicans are aiming to use the Interior Department appropriations bill to try to reopen the areas around the park to mining interests.

Salazar announced in June that he was extending the prohibition on mining on roughly 1 million acres of land near the canyon through the end of the year, a moratorium he put in place in 2009. Salazar said he prefers to set a 20-year moratorium—the longest allowable under the current hard rock mining law—but will await the outcome of an environmental analysis to make a decision on that.

The appropriations measure, from Arizona Republican Jeff Flake, would reverse Salazar’s decision and again make it possible to mine near the park. It’s one of dozens of anti-environmental riders tacked onto the Environment and Interior appropriations bill that the House is debating this week.

In years before the moratorium, mining interests staked more than 10,000 claims near the park. Those would still be allowed to go forward, as the moratorium only applies to new claims.  But uranium mining in the region raises concerns not just about damage to an iconic national park, but risks to water resources and health in the region, too. It’s also an economic concern. As Jessica Goad, manager of research and outreach with the public lands project at the Center for American Progress Action Fund recently pointed out, the Grand Canyon is an economically valuable resource:

The Grand Canyon provides an incredible place for recreation, and the Colorado River that runs through the national park provides drinking water to 25 million Americans. It is estimated by Headwaters Economics that in 2009, Grand Canyon National Park created $411 million and over 6,000 jobs in the region.

Democratic representatives from Arizona and environmental groups held a press conference on the Hill on Tuesday denouncing Flake’s measure. “For a few jobs we would screw up the Grand Canyon, the natural wonder of the world that people travel from all over the world to come see,” said Rep. Ed Pastor (D-Ariz.).

“The Grand Canyon, the crown jewel of the national park system, deserves a lot more than a rider being snuck in through the back door of an appropriations bill,” said Rep. Raul Grijalva, also of Arizona. Pastor and Grijalva intend to introduce an amendment that would reinstate the protections in the course of debate this week.

Both the Pew Environment Group and Environment America joined the lawmakers in the press conference, criticizing Republicans for going after the park that President Teddy Roosevelt once called “a natural wonder which is in kind absolutely unparalleled throughout the rest of the world.”

“If Congress isn’t going to protect the Grand Canyon, then what on earth is it going to save?” asked Jane Danowitz, director of the public lands program at Pew.