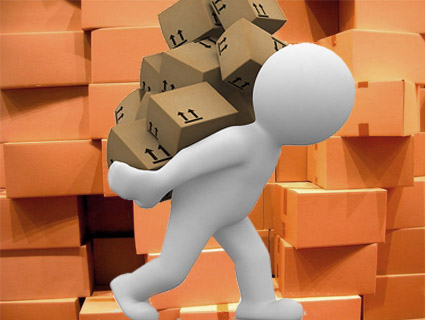 Last week, when my ex-girlfriend asked me if I’d ever been in a warehouse before, I shot her the most withering scowl I could muster. “Don’t talk to me like I’m fancy-pants,” I said as I followed her into the site she manages. “You know I worked for a moving company for five years.” But within five minutes, it was clear I had never been in a warehouse like this before.

Also read our essay on the great speedup, harrowing first-person tales of overwork, and 12 charts on just how much is being demanded of American workers.

This is a warehouse where people ship stuff for big online companies that you’ve definitely heard of. The company, which I won’t name, provides staffing for a nationwide logistics contractor that handles getting those Internet purchases from their origin—usually Chinese factories—to your doorstep. I won’t name my ex so she doesn’t get in trouble. Let’s call her Susie.

She kicked off my visit with a tour around the warehouse floor. First stop: Workers standing at tables, taking items out of a bulk box and putting them into different boxes with shipping labels on them. And that’s…pretty much it. For efficiency purposes, every step of every process has been broken down and separated out so that almost everyone does the exact same motion over and over. The people at the next stop are standing at tables and putting labels on boxes, over and over. Sweating.

“It’s hot in here,” I said. It was like 90 degrees outside. “Don’t you guys have air conditioning?”

“We do, but it’s controlled by the big guys in the suits.” Susie said everybody wears hats and coats during the winter because it’s freezing inside.

The workers are all temps. It’s been six months since the company graduated someone from temp to employee status.

“That job sucks,” she said when we passed by the loading docks. A semi was backed up to the open door. A guy was standing inside it catching taped-up, ready-to-ship boxes off the conveyor belt and stacking them in the truck bed. “There’s no circulation in there,” Susie said, shaking her head.

“How much do these people make?”

About $9 an hour. When I said that wasn’t very much—when I worked at the moving-company warehouse starting in 1998, I made $10 an hour—she replied, “For them it is. They have no jobs.” Also, it’s 50 cents an hour more than the people on the previous shift make. In a state with 8.6 percent unemployment, fierce competition for limited job openings, and a minimum wage of $7.25, you could do a lot worse.

Technically, these workers are all temps. They’re hired as temps by the warehouse company, which is contracted to handle temporary staffing by a logistics company. If they make it 90 days, they have the opportunity to become full-blown employees of the logistics company, which means benefits and an extra dollar an hour. It’s been six months since the logistics company graduated someone here from temp to employee status. At one of the other locations Susie manages, no one has been hired as a real employee for two years. One of the workers in this warehouse has been a temp for a year and a half.

After we walked past workers stuffing inflated plastic air pockets in boxes and a guy continuously taping shut the bottom of just-made boxes, we went to Susie’s office. “Hold on, I gotta fire somebody real quick,” she said, picking up the phone. She called a guy who’d been working for her for two months. She was sorry, she told him, but she had to let him go because one of the supervisors had caught him talking on the floor. The man, who she guessed is in his late 40s or early 50s, protested that he had only asked a new guy where he was from. That’s just not the culture, Susie told him. You know the rules. The logistics company sets them, and she has no choice but to enforce them.

Indeed, it does say in the new-temp handout that there is no talking allowed on the warehouse floor. Also, there are no cell phones allowed. Like a high school teacher, Susie had a pile of phones she’d confiscated in a plastic bowl on her desk. Two sick days are allotted per year, and they must be excused; after that, the temp is terminated, doctor’s note or no. Every temp is allowed one 30-minute break per day, and it must be taken in the break room. Every temp is required to have an ID badge. The cost of this badge is deducted from the temp’s first paycheck, and is more than an hour’s worth of wages.

I hadn’t even finished the orientation document when Susie picked up the phone and got instructions from another supervisor that I could tell were bad news for another guy. “You’re not really about to fire somebody else, are you?” I asked.

“Somebody did studies and spreadsheets and crunched those numbers and figured out that the cheapest way to get that job done is to treat people like that.”

“You just fired somebody less than 10 minutes ago.”

“Yeah, but he’s been taking too many breaks.”

“Are you kidding? Is anybody going to ask him why he’s taking breaks? Maybe he’s sick.”

“No, they said he’s been doing it all week. He’s a bigger dude, so they think he’s doing it”—the breakroom and the bathroom are in the heavily air conditioned part of the warehouse where the guys in the suits have offices—”because it’s too hot for him on the floor.” Susie called him and fired him for “excessive” breaks, though she pointed out to me that she didn’t actually have to give him a reason.

A few days later, I had breakfast with someone who coincidentally works with the CEOs of logistics companies. Telling him about the conditions and the sterility and the mind-numbing sadness of the warehouse made him almost too bummed to eat his oatmeal. “Somebody did studies and spreadsheets and crunched those numbers,” he said, “and figured out that the cheapest way to get that job done is to treat people like that.” Which is important, he explained, because “the profit margins on those contracts are razor thin.” Of course. A lot of the Internet retailers’ merchandise is nearly worthless—ice princess star-shaped ice cube trays, cheap sunglasses, anthropomorphic stuffed bacon toys—and is sold for nearly nothing, often with free or reduced-price shipping.

Susie told me it’s pretty dispiriting to act as though her workers are as disposable as the products they’re shipping. But that’s just the way it is, she said. The logistics clients aren’t interested in spending money on a better or more sustainable work culture. Nor do they need to. There are 100 people employed in the warehouse I visited, and Susie could fire every one of them today without costing her bosses a dime of lost profits. She has applications from hundreds of people ready to take the job.