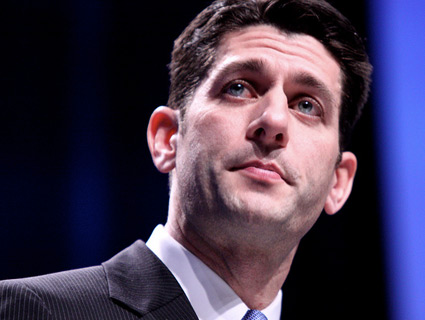 Bright and early Wednesday morning, a lively band of Wisconsinites arrived at Rep. Paul Ryan’s Kenosha constituent-services office for a fifth straight day of protests and sit-ins. The protesters were demanding face time with the Republican, who has scheduled no public town hall meetings in his district during Congress’ August recess. This time, however, a police officer was waiting for the protesters at Ryan’s front door with a message from the congressman: Get lost.

Over the past week, hundreds of people, a mix of constituents and other angry Wisconsinites, have marched outside Ryan’s Kenosha and Racine offices, angry over what they see as Ryan’s inaccessibility and refusal to face his constituents in a free, public, in-person town hall. For four days, they also held sit-ins inside Ryan’s Kenosha office—until police kicked them out. The only in-person event on Ryan’s recess calendar is an appearance at a Rotary hall outside his district with a $15 entrance fee; by contrast, Ryan held more than a dozen town halls in 2009. “This is a jobs crisis in his congressional district, an emergency,” says Scott Page, 37, an unemployed Kenosha resident. “Yet he’s not even listening to his own constituents.”

In an August 18 statement, Ryan said, “I pride myself on being accessible to those I represent.” Conor Sweeney, a spokesman for the House budget committee, which Ryan chairs, wrote in an email that the Kenosha protesters had been offered a chance to participate in a conference call with Ryan, and that their actions “were preventing Congressman Ryan’s staff from serving other constituents.” Claims that Ryan was inaccessible or avoiding angry constituents were “inaccurate,” Sweeney said.

Ryan isn’t the first lawmaker to face blowback from voters during the August recess. Freshman Rep. Lou Barletta (R-Pa.) was bashed by a newspaper in his district for refusing to schedule public town halls despite bashing his opponent in the 2010 campaign for doing the same thing. (Barletta denied avoiding his constituents.) Amidst a wave of public pressure, including from an angry crowd outside a private event he attended, another GOP freshman, Rep. Chip Cravaack (R-Minn.), finally agreed to host a public town hall in Duluth, the biggest city in his district, after planning not to do so.

Republican lawmakers who have held public town halls have found themselves at times on the receiving end of heated criticism. Rep. Randy Hultgren (R-Ill.) faced a charged crowd at a town hall and dodged a question about the effectiveness of the Bush tax cuts. Citizens protested at a town hall hosted by Rep. Steve Chabot (R-Ohio) because Chabot’s staff insisted on reviewing audience questions in writing and then selecting the ones that the congressman would answer. And on August 15, protesters chanted and shouted their way through a town hall hosted by Rep. Fred Upton (R-Mich.), chair of the House energy and commerce committee.

But the protests targeting Ryan throughout the August recess are among the most heated. Many of the protesters, organized in part by the progressive advocacy group Wisconsin Jobs Now!, have tried on multiple occasions to schedule a meeting with Ryan but have received generic responses saying his schedule is full. It was the frustration at not getting face time with Ryan, combined with his decision not to host any public town halls, that sparked the protests, says Janet Veum, a spokeswoman for the group. Veum says protesters don’t want a telephone conference call with Ryan. “What they want is a face-to-face meeting with their congressman,” she says. “And a telephone conference call is not even close to that.”

Ryan has felt this kind of constituent anger before. In April, he asked police to eject a man at a public town hall in Racine who repeatedly yelled at Ryan about his much-debated plan to gut Medicare by turning it into a voucher program, jacking up costs for seniors. Discussion of that plan, which would also transform Medicaid into a block-grant program at the state level, was met with both cheers and boos during a series of spring town halls.

This time around, Ryan’s protesters have no intention of giving up. Maria Morales, a 67-year-old Racine resident, says she, too, has tried unsuccessfully to schedule a meeting with the Wisconsin Republican. Morales, who lost her part-time job earlier this month, says she first protested outside Ryan’s Kenosha office but has since taken her agitating to the Racine office. She has no plans of leaving. “We’ll just stay around till he sees us,” she says. “It’s not like I have a job to go to.”