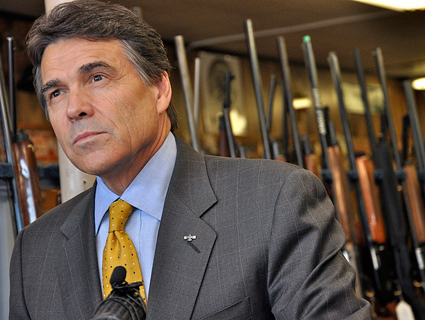 Pledges, if you haven’t heard, are all the rage in the Republican party, so now that he’s squarely in the running for the GOP presidential nomination, Texas Governor Rick Perry has some catching up to do. On Wednesday, Perry became the sixth candidate to sign an anti-abortion pledge from the Susan B. Anthony List that commits him to a set of radical anti-abortion measures if elected president. The Dallas Morning-News has the nuts and bolts:

The pledge has four parts:
* a promise only to pick federal judges who adhere to the strict “original meaning of the Constitution,”
* to “select only pro-life appointees” for attorney general and assorted posts at the National Institutes of Health, Justice Department and Department of Health & Human Services.
* to defund Planned Parenthood and any other organization that performs or funds abortions and to end all taxpayer funding of abortion, domestically or overseas and
* to sign into law the “Pain-Capable Unborn Child Protection Act,” to ban abortion based on the premise that fetuses can feel pain.

The fetal pain measure, for the unfamiliar, is part of a trend at the state level. At least a dozen states have considered prohibiting abortion after 20 weeks, relying on some pretty suspect science. As my colleague Kate Sheppard reported in May, summarizing recent research on the subject, “there is no conclusive evidence that fetuses can feel pain at that point in gestation, nor are they considered viable.” But the larger goal is procedural: to bait opponents into challenging the laws in court.

By signing the pledge, Perry joins a list that includes Reps. Michele Bachmann, Ron Paul, and Thaddeus McCotter; former Speaker of the House Newt Gingrich; and former Sen. Rick Santorum. Former Massachusetts Governor Mitt Romney, the frontrunner for the GOP nomination, has not signed the pledge—a position that’s put him at odds with many social conservatives, who never really trusted him to begin with. (Former Utah Governor Jon Huntsman has also abstained, but that shouldn’t come as much of a surprise given his current aversion to the GOP base.)