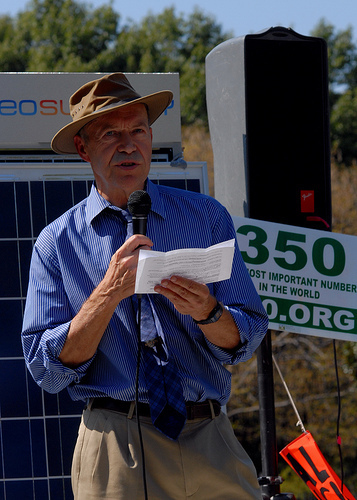 The massive oil pipeline TransCanada wants to build from Alberta, Canada to Texas has already garnered criticism from environmentalists, senators, and farmers. On Wednesday, a group of prominent scientists added their names to the opposition roster with a letter to President Obama that calls the Keystone XL pipeline “environmentally destructive” and nonsensical.

“The tar sands are a huge pool of carbon, but one that does not make sense to exploit,” the letter asserts. “It makes no sense to build a pipeline system that would practically guarantee extensive exploitation of this resource.” Because the pipeline would cross an international boundary, it requires a presidential permit issued by the Department of State, and legislation (PDF) recently passed by the House of Representatives would force Obama to make up his mind by November 1.

If Richard Houghton, a senior scientist at Woods Hole Research Center and one of the letter’s signatories, has anything to do with it, the president’s answer will be a big fat “No.” “The point of government is to look after the public interest, and I can’t believe this pipeline is in the public interest,” Houghton said in a phone interview. “It seems as though a pipeline is focused on immediate needs and not thinking on a bigger scale.”

For a large group of scientists to explicitly weigh in a policy decision is rare, but the letter has no shortage of climate change luminaries: other names include James Hansen of Columbia University, who in 1988 presented some of the first testimony to Congress about the effects of climate change and was hailed by Bill McKibben as a “real hero” of the environmental movement, and Michael MacCraken of the Climate Institute, who had a hand in the landmark Intergovernmental Panel on Climate Change reports.

What effect the letter will have on the president’s decision remains to be seen (the White House has not yet returned a request for comment), but Houghton pointed out that the feds have a bad track record of listening to the advice of scientists on climate change. “I see Congress as really stopping the whole world’s approach to controlling carbon emissions. People look to [the US] for leadership and they’re not seeing it.”