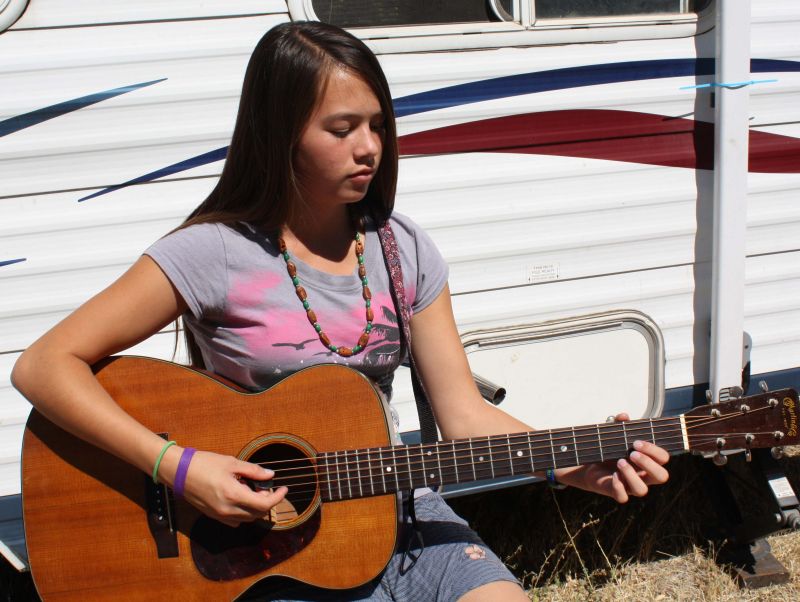 Aissa “AJ” Lee made her bluegrass debut in a pizza place when she was just four years old. “They had to hold me up to the microphone because I was too small,” she recalls. “I was so nervous. But then at the end I heard the applause, and it was just kind of magical.” She’s been performing ever since.

Now 13, AJ plays regularly at bluegrass festivals and with her two bands, the Tuttles With AJ Lee and OMGG (which stands for Obviously Minor Guys and a Girl). She’s also traveled from her home in Tracy, California, to perform at the International Bluegrass Music Association‘s annual concert in Nashville, where she’s played alongside other rising young bluegrass stars like Sierra Hull and Sarah Jarosz. AJ plays mandolin, fiddle, and guitar, but what sets her apart from other musical whiz kids is her surprisingly sophisticated voice: The Northern California Bluegrass Society has named her best female vocalist for two years running. AJ and I talked about stage jitters, the evolution of bluegrass, and her fallback aspiration—to be an Air Force pilot.

Here’s AJ performing Gram Parson’s “Hickory Wind.” Even if you don’t have time to read the whole interview, scroll to the end to check out her bluegrass take on Kesha’s “Tik Tok.”

Mother Jones: How did you get into bluegrass music?

AL: My mom and her sisters and her brothers would play music of all sorts of genres. My mom wanted to get me playing music. So she met up with some people at a pizzeria, and they had this music going on. She was like, “What’s that kind of music? I’ve never heard that before.” And she got involved in it. It turned out that I really liked that kind of music, too. It’s fast and upbeat. I’ve just stuck with it my whole life.

MJ: Do you get stage fright?

AL: A couple years ago I played on the stage at International Bluegrass Music Association concert, which is held in Nashville every year. There, I met Sierra Hull and Sarah Jarosz and the Deorfels. I didn’t know at the time that there were going to be people who were known all around the world. I was glad that I got to play with them. I didn’t know that they were going to be so cool.

AL: Well, usually folk and bluegrass music tell story songs, unlike nowadays, when it’s all about the bass and the drums that get you dancing. These songs get you dancing AND they tell a story. Sometimes they’re songs about the past, so you get to learn a little bit of history. And you get to have fun. Usually when you’re playing you’re smiling and laughing. And usually someone has something funny to say about the song.

MJ: Do your classmates at school know that you play bluegrass music?

AL: Yeah. I tell them all about my festivals and everything. I actually did manage to get one of my friends to go to the festivals, and ever since then their whole family got involved and bought instruments, so I’m happy about that.

MJ: How much do you practice?

AL: I probably practice every day, anywhere from 20 minutes to 5 hours. But it varies. Sometimes I practice a lot and sometimes I don’t. It depends how I feel.

MJ: Do you practice with your bands, too?

AL: More by myself, because we don’t live close to each other. So we usually get together about once a month.

AL: Yeah! I listen to the radio. I listen to a little bit of rap, not a whole bunch. I’m not really a fan of that. But I listen to country, some hip-hop, and folk and classic rock.

MJ: Who are some of your favorite bluegrass musicians?

AL: I really like the Punch Brothers, but they’re kinda edgy bluegrass. I like Alison Krauss and Rhonda Vincent. My new favorite band is the Doerfels. They’re kinda bluegrass. And Northern Departure.

MJ: How about non-bluegrass music?

AL: I do like Katy Perry. And Sugarland. Everyone I hear on the radio I basically like.

MJ: Do you have hobbies besides music?

AL: We have a lot of animals that we take care of. We have horses and chickens that keep us occupied. Then TV and video games, of course.

MJ: You mentioned how the Punch Brothers are edgier than most bluegrass bands. Some people think that bluegrass is just fine the way it is, and that you shouldn’t mess with a good thing. What do you think?

AL: I really like what bluegrass is morphing into. I believe that there are different stages of bluegrass. There’s the people who like the really old type. They’re very strict. Then there’s the audience that likes the old bluegrass, but they’ll give the new generation a try. And the new generation I’m sort of getting into. I don’t really mind that they’re changing bluegrass to be more modern. As long as people still acknowledge where it came from and what it really is, from its roots.

MJ: What do you think makes for a great concert?

AL: Well you definitely need to practice! You also need songs that appeal to the audience, that they’ll recognize. Then you want some new songs that maybe nobody has heard before so you can introduce them. You also have to have good stage presence. You have to be able to talk to the audience, and just make them like you and have fun.

MJ: What’s your best memory of a performance?

AL: I love performing at the IBMA because there are so many different people from all over. But I also liked the most recent performance we did because we played Brown-Eyed Girl and I got to play the tambourine. All the hippies got up and they danced. It was really fun to watch.

MJ: What are you working on now?

AL: I’m actually starting to work on my own CD, which would be just me and accompaniment and maybe some harmonies.

MJ: Do you want to be a musician when you grow up?

AL: I do. If these CDs take off and we get a good record deal or something tremendous happens, then I’d like to roll with it. But if I end up just going along steadily at a good pace, I also want to focus on my education, and I was thinking about joining the Air Force.

AL: Yeah! I’m kind of confused about that now because I haven’t figured out which one I really want to do. About a year ago I went to this Young Eagles place, where they take kids up for free into an airplane, and they even let you fly it a little bit. Ever since then I’ve been hooked on planes. I’ve always wanted to do something good for my country. And so, planes…country…the Air Force!