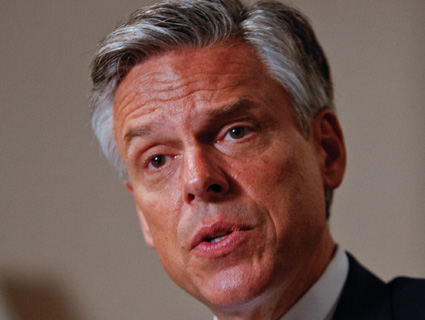 If being a good governor means serving as a cheerleader and chief booster for local industry, then Utah’s former chief executive, Jon Huntsman Jr., did a solid job. He has been touting his stewardship of the state’s economy on the campaign trail. But one thriving industry in Utah that Huntsman helped—and which supported him financially in return—relies on dubious practices.

Utah is home to the nation’s largest concentration of companies built around the practice of multilevel marketing, which is widely considered to be a type of pyramid scheme. While Huntsman was governor, he did his part to keep them in business.

Known as MLMs, these companies often sell overpriced nutritional supplements or other health products, not through retail outlets but rather through networks of individual distributors. Among the signature companies in Utah are Nu Skin, Usana, Tahitian Noni Beverages, and Nature’s Sunshine Products. Instead of relying on consumer sales, they make their real revenue from constantly recruiting more salespeople, who usually have to “invest” in the opportunity to sell the products and then must recruit their own network of distributors to make money. Most distributors at the bottom of the pyramid never make the big bucks promised by the company. Because of this structure, these types of companies are frequent targets of law enforcement, federal regulators, and consumer lawyers.

As governor, Huntsman was cozy with these folks, who have claimed that their businesses bring the state more than four times as much revenue as the vaunted ski industry. Usana donated $20,000 to Huntsman’s political action committee in 2006, one of the largest contributions he received that year. Nu Skin’s political action committee donated $7,000 to his 2004 campaign.

In 2006, Huntsman took representatives of both companies on a trade mission to China, which has largely banned MLM companies from operating because of their business practices. Huntsman lobbied the Chinese to open their markets to MLMs. He also did the industry an important regulatory favor that year. At the behest of the Direct Selling Association, the trade lobby for multilevel marketing companies, the state Legislature passed a bill that essentially gutted Utah’s anti-pyramid-scheme law. The bill Huntsman then signed into law may have sanctioned the practices of at least 20 companies in the state thought to be illegally operating a pyramid scheme under the old statute, according to Jon Taylor, the head of the Utah-based Consumer Awareness Institute. Taylor, a retired former Brigham Young University professor, became a critic of the industry after a friend pressured him to become a distributor for Nu Skin.

Taylor actively lobbied against the pro-MLM bill, bringing in consumer experts from other states who were dealing with the wreckage created by Utah’s lucrative cottage industry. Bruce Craig, a former Wisconsin assistant attorney general, warned in a letter to Utah senators that the bill was “a package deal set up by those who want to legalize pyramids…If you want to pass the bill, do it. However, you shouldn’t be allowed to pretend that you were unaware of the adverse economic consequences that will be visited upon Utah citizens by this legislation.”

Taylor said he also sent pleading leaders to Huntsman begging him not to sign the bill, to no avail.

The change essentially legalized business practices that are considered unfair and deceptive in many other states and by the Federal Trade Commission. The prior law had defined a pyramid scheme as, among other things, a business where people involved derive their compensation primarily from recruiting people into the sales scheme, rather than from retail sales themselves. But with a few small wording changes to the law in 2006, now as long as a Utah company’s salespeople sell something like noni juice or acai berry supplements—to anyone, regardless of whether they are simply other salespeople roped into the scheme—they can’t be prosecuted or sued for running a pyramid scheme. Virtually all of the companies these days operating as pyramid-schemes-in-disguise sell some such product, even though most of the buyers are the companies’ own distributors. The law effectively immunized the companies from lawsuits or regulatory actions in the state.

Utah had never been particularly aggressive about prosecuting pyramid schemes perpetuated by its homegrown companies. The state’s longtime attorney general, Mark Shurtleff, was elected with lots of money from MLM companies, and he supported gutting the anti-pyramid scheme law that he was charged with enforcing. But the old law, at least, had allowed private lawyers to bring class actions against companies headquartered in Utah, which loomed as a threat to their bottom line.

Nu Skin, for one, has a provision in its contracts with distributors requiring them to bring any lawsuits against the company into Utah courts, where the Utah law applies, rather than in their home states, which might have more stringent consumer protection laws. The new law ensures that ripped off distributors don’t have a prayer of holding the company accountable in a Utah court.

The 2006 bill signed by Huntsman benefited some of his biggest backers, including Usana Health Sciences and Nu Skin, publicly traded companies that have good reason to want extra insulation from consumer protection regulation and lawyers.

Both companies have questionable track records. The Provo-based Nu Skin, which purportedly sells vitamins and skin care products, has a long and troubled history with regulators dating back to the early 1990s, when several states were investigating the company for operating a pyramid scheme. In 1992, it settled a threatened lawsuit with the Michigan attorney general’s office and four other states, promising to clean up its business practices and paying $25,000 to cover the cost of the investigation. It’s worth noting that during that time, when Nu Skin was under fire from state consumer protection officials, its official spokesperson was Jason Chaffetz, who now represents Utah in Congress. In 2004, Chaffetz managed Huntsman’s gubernatorial campaign, and he went on to serve as his chief of staff.

Nu Skin also got into hot water with the Federal Trade Commission for making false claims about its products, including weight loss supplements and baldness cures, and for misrepresenting the earnings new individual distributors would make. (Most, according to Taylor, who has reviewed Nu Skin’s SEC filings, are likely to lose money, not make it.) In 1994, the company settled a case with the FTC and signed a consent order promising not to engage in false advertising and to stop misleading potential distributors, among other things. In 1997, the FTC fined Nu Skin $1.5 million for violating the consent order.

Usana has had similar run-ins with investigators and has been the subject of numerous lawsuits accusing the company of being a pyramid scheme. The company’s founder, Myron Wentz, renounced his American citizenship in the 1990s, reportedly to avoid paying taxes. In 2007, he owned 45 percent of the company’s stock, which he held in the off-shore tax haven Isle of Man. Usana has been the subject of SEC probes, stemming from irregularities in its financial reporting.

In 2007, several of Usana’s board members had to step down after revelations that they’d misrepresented their credentials in SEC filings. As it turned out, the company’s chief financial officer wasn’t, as he’d said, a CPA, nor was its “audit committee’s financial expert.” Another board member had to quit after the news broke that his Ph.D. was in forestry, not biology, as he’d claimed. Meanwhile, a “doctor” on its medical advisory board was forced to resign after the discovery that he had actually surrendered his medical license in 2004 to avoid disciplinary proceedings in Georgia. The company’s accounting firm quit and Usana was threatened with delisting from NASDAQ.

Consumer advocates have called on the FTC to investigate the company based on information showing that the company’s earnings are based almost entirely on recruiting new distributors rather than selling anything. (The Wall Street Journal found in 2007 that only 14 percent of Usana’s products were sold retail. The rest were sold to the company’s distributors, the hallmark of a pyramid scheme.) A Salt Lake Tribune study found in 2010 that distributors for Usana earned commissions of, on average, about $600 a year, while a tiny percentage of top sellers made more than $800,000.

The Consumer Awareness Institute’s Taylor says that while Huntsman may have thought he was helping the local business community when he went to bat for these sorts of firms, he was instead furthering a scam that hurt thousands of people, both in Utah and far beyond its borders.

The Huntsman campaign did not respond to a request for comment on this story.

Taylor says he thinks Huntsman is a good man, but that the MLM industry is awash in money and has outsized political influence. Utah has the dubious distinction, he notes, of serving as home to more MLM companies per capita than anywhere else in the country. “When money controls the decision making” for politicians, including Huntsman, he laments, “this is just what happens.”