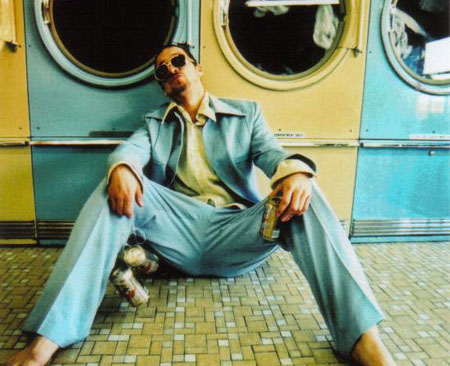 When Esquire published its list of “50 Songs Every Man Should Listen To,” one reader responded that the editors had left out one crucial band for the XY set. It was That Handsome Devil, a gonzo-punk outfit out of Boston, whose music sounds as if a jowling, snarling creature had crept down from the rafters to join Mr. Toad on his wanton hell ride. But on the band’s second (or fourth, if you include EPs) album, The Heart Goes to Heaven, the Head Goes to Hell, the musicians are in full control of their Haunted House-macabre sound. “Charlie’s Inferno” is an unintentional nod to the TV show It’s Always Sunny in Philadelphia. “Adapt” sounds like a back alley fist fight about to bust out. “Inside You,” finds lead singer Godforbid mastering that clinging-to-the-bottle drawl the band’s become known for. When I caught up with Godforbid last Friday, he regaled me with talk about hustling beer at Coney Island, milking tall tales, and his struggle between pure intentions and royal douchebaggery.

Mother Jones: One of my favorite tracks is “How to Get Money.” Any tips for readers who are broke and pissed off?

Godforbid: [Laughs.] If I had gobs of cash I’d have plenty of ideas. But I’ve given all my tips up on that track. Well, there’s an insane hustle in New York. I’ve got three jobs to keep the wheels spinning. But you can get creative with it; there are always fun little hustles out there. You can take beers and sell ’em down at the Coney Island Beach. Just walk around with a cooler and have a buddy walk 20 feet in front of you to cop watch. You can sell them for whatever price you’d like because people are just too lazy to stand in line.

MJ: What sort of work are you doing?

GF: I don’t have many commodities other than the fact that I can write and perform. I’ve got three jobs where I’m making the same amount of money I would if I were 16. I press records at Hit-Bound Records, but it’s hard working in a hot factory like that. I’ve got to meditate for a bit, turn into a robot for eight hours, to be able to do that job. And I do janitorial work for a plastic surgeon—you’ll find fat globules and blood spatters, but it makes for good song writing. And depending on the gig, I’ll do construction here and there.

MJ: Wow, then your music is really a product of hard-ass labor!

MJ: How do you even find time to work on music?

GF: I like to go on walks or write at bars. I wrote the first EP at a strip club; I used to always kick it there. Not because I’m a gross dude, but because something would happen where the dancing would take over that constant sexual drive that all males have to live with and I could numb myself out; the writing would just pour out. Now I’m kind of on this hand recorder bridge-walking deal. The walk across the bridge is like my church; it’s the wilderness of the city for me. I just hold my recorder and walk it, possibly four times a day, until my legs go numb.

MJ: Where’d the name Godforbid come from? Godforbid what?

“People keep throwing this Tom Waits shit on me, so I like to set the record straight by saying my voice comes from a mashup of Dr. Teeth an Rowlf the dog.”

GF: [Laughs.] It’s kind of like a madlib, you can just fill in whatever you’d like after that. I came up with hip-hop so I had a moniker, and I grew up with nicknames, too. My old man was a truck driver and he was always called 9 Ball. Godforbid was a young joke, really. I called my boy “Lunch Line” when we were in school. I was like “Lunch Line?” just asking him if he wanted to come with me to get some food, and he turned on me all serious saying,”Don’t call me Lunch Line!” Joking, obviously. And then that same day I showed up for class and the teacher said, “Oh God forbid you showed up” and then my buddy was like, “Godforbid, you showed up?” And it stuck from there. I had people who only knew me as that. To this point now, it’s like I can’t call myself high fructose corn syrup because Coca-Cola’s the name that sells. They’re not ready to hear high fructose yet.

MJ: Speaking of half-truths, what’s the tallest tale you’ve heard about your band?

GF: Well, there’s a big rumor going around that we met in the back of a cop car. I don’t know how many times these folks have been arrested, but they often don’t put you in the car with other non-related people. But we’ll gas it up and let that one run.

MJ: I read somewhere that you voice was influenced by Dr. Teeth, which is pretty dead-on. So your sound is Muppet-inspired?

GF: It’s more because people keep throwing this Tom Waits shit on me, so I like to set the record straight by saying my voice comes from a mashup of Dr. Teeth and Rowlf the Dog. I didn’t realize until recently, but my voice sounds exactly like my dad, Larry Lee Oppel. I used to go with my dad on truck drives for weeks long and it must have rubbed off. We have a slightly different twang in different parts, but I never put it together until we laid down a track.

MJ: Have you ever walked into an arcade and saw a high schooler jamming to “Elephant Bones” on Guitar Hero?

GF: Oh, I wish to God I could see that! I’d go nutty. They were pulling artists from Boston onto that game, so it worked out well. I was kind of against it when it came out—I’m very much an anachronism on the industry. It’s taken me a while to get used to this people-play-fake-guitar kind of world, and then when we heard we were going to be put on the soundtrack, I was like, “Oh hell yes! Let’s go for it.” Lot of push and pull.

“I looked at myself and realized I had become a royal douchebag. It was a horrifying thing.”

MJ: Does that ambivalance resonate on your new album?

GF: Definitely. It’s the duality of this travel. It’s what I face every moment of every day. My head leads me through this hell that I have to live in and my heart left me at the Pearly Gates. I see it as an undated and universal truth as far as the pain of man is concerned. Yeah, I went up to the mountain and ate the enlightenment pill, but then I came down and realized, “Ugh, this isn’t working. Enlightened people aren’t funny.” The beauty in the experience is the fluctuation anyway. You gotta be down there and you gotta scramble it up.

MJ: The devil you know, right?

GF: Yeah that’s where That Handsome Devil comes from. It’s a very simple, multi-layered phrase. Part of it comes from that struggle within. I had pure intentions, but then I became increasingly aware of how to manipulate the moment or people around me. I looked at myself and realized I had become a royal douchebag. It was a horrifying thing. I woke up from it like a blacked out night, “Ah! I’ve been a douchebag all these years!” just like a cold sweat. The other part about That Handsome Devil is that handsome can mean generous and the devil is just the first rebel. It’s all about poison being presented to you in a candy shell, and whether you should accept or deny that gift is entirely up to you.

Here’s “Rob The Prez-O-Dent.” You can sample the new album on iTunes.