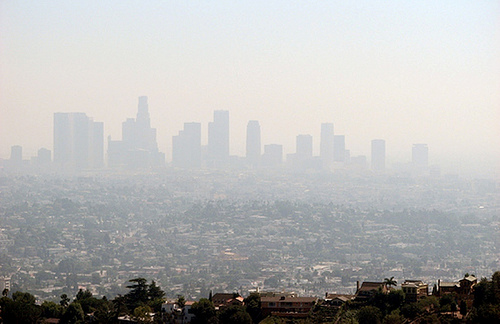 Earlier this month, President Obama angered a lot of environmentalists, public health groups, and people who enjoy breathing when he announced that he was directing the EPA to abandon new smog rules. According to the American Lung Association, the current weaker standard for ozone pollution means that as many as 186 million Americans are currently breathing in unhealthy levels of smog—and a new report out today highlights the worst parts of the country when it comes to air quality.

Environment America took a look at the data on ground-level ozone pollution around the US, concluding that the five smoggiest major metropolitan areas last year were:

The report also ranks the smoggiest mid-sized metropolitan areas, or those with between 250,000 and one million residents. The worst:

So far, 2011 hasn’t been a great year for air quality, either. The Los Angeles area has already had 85 smog days, more than double the number of the second-smoggiest city so far this year, Atlanta.

All of these figures are based on the current smog limit of 75 parts per billion—weaker than those recommended by EPA scientists. If the EPA actually tightened the standard to 60 to 70 parts per billion, which the agency planned to until Obama stepped in, most metropolitan areas would have recorded a number of additional unhealthy air days.