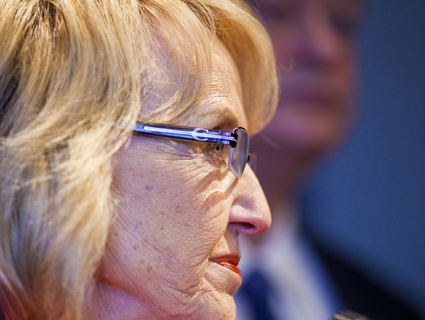 Over the past month, the Arizona Independent Redistricting Commission has been floating a new election map that would create four Republican-friendly districts, two Democrat-friendly ones, and three toss-ups. That makes Gov. Jan Brewer really, really angry, Roll Call reports:

The GOP governor began the impeachment process for removing members from the Arizona Independent Redistricting Commission by submitting a letter outlining her grievances to commission Chairwoman Colleen Mathis. . . .

Arizona Democratic Party Executive Director Luis Heredia described the governor as “drunk with power,” calling the move “a brazen power grab that would rival any in Arizona history.”

“She is moving toward impeachment of citizens on the Arizona Independent Redistricting Commission simply because these volunteers have fulfilled their duty to draw fair and competitive districts,” he said.

Arizonans voted the IRC into existence in 2000. The non-partisan body’s purpose: To take state lawmakers out of redistricting, in hopes of making it a less overtly political process. But Brewer seems intent on catering to GOP interests and undermining voters, and is accusing the IRC of drawing a gerrymandering map that dilutes Arizona’s electoral competitiveness.

The governor has the power to remove members from the body, which includes two Democrats, two Republicans, and one Independent, and is widely expected to target Chairwoman Mathis. But she must first get the backing of two-thirds of the Arizona state Senate, where Republicans hold a 21 to 9 advantage over Democrats. That solid majority probably explains, at least in part, why Brewer is doing this now. Currently, a committee made up mostly of Republican state lawmakers is reviewing the IRC’s plan, and will issue its recommendations soon.

Brewer’s move has caught the attention of the Democratic Legislative Campaign Committee (DLCC) and executive director Michael Sargeant. “Unsatisfied with new congressional and state legislative maps that already favor Republicans, Arizona’s GOP leadership is making a naked power play,” Sargeant said in a press release on Thursday. “Arizona Republicans are abusing their power for partisan gain and subverting the will of the electorate, which voted to take redistricting out of the hands of politicians over a decade ago.”

For the past several months, state Republicans have been weathering accusations that their proposed election law changes don’t adequately reflect the state’s Latino population, making the new map ripe for rejection by the DOJ. Under Section Five of the Voting Rights Act, Arizona is one of nine states that must ask the DOJ to pre-clear part or all of any changes to election laws.

State Democrats didn’t think Brewer was serious about her threats to dismantle the panel. What might have set her off: A recent poll of Arizona voters showing that President Obama enjoys slim (but surprising) leads over GOP presidential hopefuls Mitt Romney, Herman Cain, and Rick Perry. Obama’s popularity versus a still-unresolved GOP presidential field isn’t necessarily any sort of bellwether for local races. But Brewer is taking every precaution.