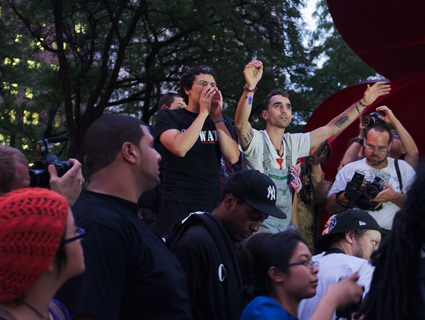 It’s an invention of necessity that nicely reinforces the protesters’ messages of community, horizontalism, and strength in numbers. Also, it can’t be confiscated by police.

Lately, the human mic has been turning up at non-Occupy protests, disrupting a hydrofracking panel at Ohio State, a Bachmann address in South Carolina, and a Scott Walker speech in Chicago. I’ve seen lots of Internet videos in which guerilla protest groups like Code Pink crash official events and interrupt with signs, songs, and gimmicks. They often seem kind of pointless. The breathless shouts of a lone disruptor or a few scattered people usually can’t get the message across to a whole room before being cut off and whisked away by security. But the human microphone is a force multiplier; when tens and even hundreds of people echo the same speech at a rapid clip, they suddenly outnumber the powers-that-be in the room—and their message can actually be heard.

Here are some recent videos of human-mic disruptions at all sorts of public protests (h/t nettime):

At the Panel for Education Policy in New York on October 26:

And at a natural gas industry panel at Ohio State, students protesting hydraulic fracturing (a.k.a. fracking) managed to get their message across last Friday (November 18):

We have yet to see what the next step for Occupy Wall Street will be. But the movement’s lasting legacy may include a handy lo-fi trick that future protesters can use to turn the tables anywhere, anytime, no equipment necessary.