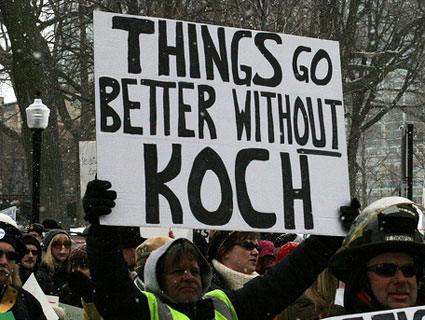 Building a Better Ohio, the political group created to defend GOP Gov. John Kasich’s anti-union bill and staffed by at least three Kasich administration staffers, released its donor list to the public on October 27. By law, BBO didn’t have to disclose anything about the individuals and companies who pumped $7.6 million into its coffers (it still hasn’t said how much each donor contributed), and it made a show out of telling the public who gave it money. But largely overlooked and unmentioned is a slew of contributions to BBO from the Koch-funded, free market advocacy group Americans for Prosperity.

AFP, which boasts of having 1.8 million activists in the US and 34 state-level chapters and affiliates, contributed more than $28,000 directly to Building a Better Ohio’s political action committee between September 1 and October 19, state campaign finance records show. Those contributions came in the form of in-kind donations that paid for phone banks, radio ads, consulting fees, robo calls, and office space—all key ingredients for getting out the vote and urging Ohioans to vote yes on Issue 2, the November 8 ballot referendum that will decide the fate of Kasich’s SB 5 bill that would curb collective bargaining rights for 350,000 public workers.

AFP’s Ohio chapter has also been active in the Issue 2 fight. It has hosted 13 “Taxpayer Town Hall” events to sell Ohioans on the benefits of Kasich’s bill, enlisting the head of the Buckeye Institute for Public Policy think tank, part of a national network of conservative think tanks, to talk up the benefits of SB 5.

This isn’t AFP’s first foray into high-stakes politics. The group was a key player growing the tea party movement and fueling the 2010 wave of Republican victories in Congress. It also ran ads in Wisconsin during that state’s union fight this winter. David Koch, one-half of the billionaire Koch brothers duo, used a chunk of his fortune to create the group in 2004; his charity has given $1 million to the Americans for Prosperity Foundation, the group’s 501(c)(3) offshoot, according to charitable filings compiled by the liberal media watchdog Media Matters for America.

Americans for Prosperity isn’t the only controversial outfit on Building a Better Ohio’s donor list that’s flown under the radar. State campaign finance records show that the group Ohio 2.0 contributed $11,000 in in-kind donations to BBO in the form of office space and phone usage.

Ohio 2.0 is a veritable black box. It has no website, no Facebook group, no Twitter feed. It legally didn’t exist until August of this year, according to state business records, which blandly describe Ohio 2.0’s purpose as “[promoting] the common good and general welfare of Ohio.” The only name anywhere on the group’s state filings is David Langdon, a Cincinnati attorney.

This isn’t Langdon’s first association with shadowy political groups. He was the attorney for LetOhioVote.org, a non-profit created to challenge a plan by former Ohio Gov. Ted Strickland (D) to allow the use of video slot machines in horse track casinos. LetUsVote.org, which raised $1.55 million from an anonymous Virginia consultant, came under fierce attack in early 2011 from outgoing Secretary of State Jennifer Brunner (D), who alleged the group broke state campaign finance law by not disclosing its funder. Brunner referred the group’s four members (but not Langdon) to the state attorney general for prosecution. Langdon, however, told the Cincinnati Enquirer that Brunner’s allegations was “just her being a sore loser.”