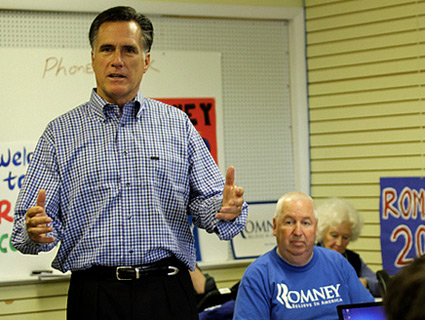 During the CNBC debate, “Mad Money” host Jim Cramer asked the candidates if they believe corporations have a social obligation to create jobs, or if—citing Milton Friedman—corporations exist solely to produce returns for shareholders.

Mitt Romney responded to what he called “an interesting philosophical” question by stating that “you don’t have to decide between the two [because] they go together!” That may be all well and good (well, maybe not quite…), but his response jumped the shark right after he embraced the popular conservative talking point about how Democrats “think when corporations are profitable, it’s a bad thing.”

Romney went on to lambaste President Obama’s alleged attitude toward corporate profits, insisting that “we have a president and an administration that doesn’t like business…I like jobs!“

The “Obama wants to murder your business” meme is wholly self-discrediting. In the real world, Barack Obama hates rich businessmen so much that he oversaw the staggering resurgence of Wall Street’s prosperity. He is so against big business that his administration pushed the government intervention that preserved America’s auto giants. And he is so hostile towards the financial sector that his 2012 campaign has raked in more money from its employees than all of the Republican candidates combined.