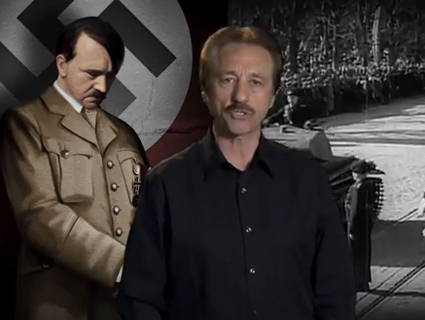 A still from "180," an anti-abortion film that compares reproductive rights to the Holocaust.<a href="http://www.youtube.com/watch?v=7y2KsU_dhwI&feature=player_embedded">The Way of the Master</a>/YouTube

On Tuesday, Mississippi voters will weigh in on ballot question 26, aka the Personhood Amendment, which would change the state Constitution to say that fertilized human eggs are legal persons. The measure, if enacted, would make many kinds of birth control illegal (its supporters call the morning-after-pill “a human pesticide”), and ban abortion in all cases—even in instances of rape (supporters organized a “Conceived in Rape” tour earlier this year to promote the amendment). A Public Policy Polling survey released on Monday said the electorate is almost evenly split on the measure.

So how are supporters getting out the vote? By blasting out emails promoting a film that equates support for reproductive rights with support for the Holocaust. 180 is a documentary by Australian New Zealand filmmaker Ray Comfort, and features graphic images from concentration camps. Per a press release, Personhood USA has sent out a link to the film to 600,000 eligible voters in Mississippi. Here’s the film:

The film, billed as “33 minutes that will rock your world!,” attempts to make the case that abortion is similar to the Holocaust. Incidentally, this isn’t the only movie being promoted by Personhood supporters ahead of the vote. Yes on 26, the main outfit supporting the Personhood Amendment, has also been promoting October Baby, which the Huntsville Times describes as “a coming-of-age love story that follows college freshman Hannah, who learns she’s not only adopted, but an abortion survivor.”