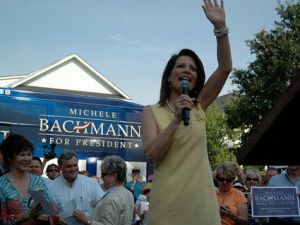 This video of an eight-year-old cub activist named Elijah confronting Rep. Michele Bachmann (R-Minn.) on gay rights hit the tubes on Sunday and went viral pretty fast. It’s pretty easy to see why: Elijah tells Bachmann, “My mommy’s gay but she doesn’t need any fixing.” Bachmann’s response, other than momentary shock, is to wave “bye, bye” to the kid.

Bachmann is currently lagging in single digits in Iowa, where by all accounts she needs a strong showing. But she’s built up enough of a reputation for her opposition to gay rights that, even as she slides in the polls, she still has a pretty sizable bullseye on her back and has been on the receiving end of a number of similar video ambushes.