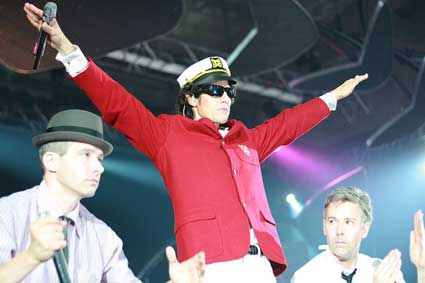 Reader’s choice lists are so often middling disappointments, full of safe popular music that we’ve been tired of since July. But not this one. The diverse and thoughtful Facebook recommendations from Mother Jones readers have already provided hours of procrastination—ahem, research—on YouTube.  (If you don’t already follow us on FB, sign up here.) No Gaga, Kanye, or Beyoncé—not that we don’t love Beyoncé. So without further ado, here are your top albums picks for 2011. (And check out our top albums of 2011.)

El Camino, The Black Keys (Nonesuch): The Black Keys [see below] have been on the rise for years. They teamed up with producer Danger Mouse for this album and it takes them to a whole other level. It’s the best 38 minutes of music in 2011. —Jason Cienkus

is back with a beautiful new album that finds him in a much better, healthier place. —Marci Ankrom

Elsie, The Horrible Crowes (SideOneDummy): This side project of The Gaslight Anthem front man Brian Fallon shows the continued maturing of his songwriting as the melodies truly carry the album. —Robert Ruszczyk

Stone Rollin’, Raphael Saadiq: For pure entertainment, [the album] (and the soul review tour of the album) is a great dose of high octane, nonstop good music and arrangements. —Susan Mumpower-Spriggs

Bon Iver, Bon Iver (Jagjaguwa): I was late to the game in really getting into Bon Iver, but when I listened to the whole record through, it changed me a little. Each time I listen to it now, it speaks to me in a different way with its melancholy beauty. (Consequence of Sound listed Holocene as the best song of the year and I agree 100 percent.) —Alex Proaps

David Comes to Life, Fucked Up (Matador Records): It’s a Rock Opera about factory workers during the Reagan era. Sounds like it would be impossible to pull off something like this, but it is amazing. [See below.] —Nathan Bouchard

Augustana, Augustana (Epic): The fourth studio album by rock band Augustana gives us 10 solid songs that are sonically and aesthetically pleasing despite the messy break up that occurred this October after their summer tour. —Robert Ruszczyk

Widening Embrace, Carolyn McDade and Friends (Self-released): Gorgeous songs, meditation on embracing and caring for all Beings on the planet; and all profits go to support education, advocacy, or action consistent with the principles of The Earth Charter in creating a just, peaceful, and sustainable world. —Marian L Shatto ‎

Revelator, Tedeschi Trucks: The recording of the year if you’re a blues fan. [See below.] —Thom Langley

The Harrow and the Harvest, Gillian Welch (Acony Records): Gil and Dave’s voices and guitars blend seamlessly and beautifully. The album manages to be both sad and hopeful. —Marci Ankrom [Also check out MoJo‘s interviews with Welch and her musical soulmate Dave Rawlings.]

‎Tamer Animals, Other Lives (TBD Records): Other Lives [see below] practically upstaged Bon Iver this year on tour. Their music takes you places, both new and familiar. Just put these tunes on repeat until further notice. —Amelia Mooney

The Martyr, Immortal Technique (Viper): Best political rap out there, and album of the year. —Patricia Ornelas-Moya