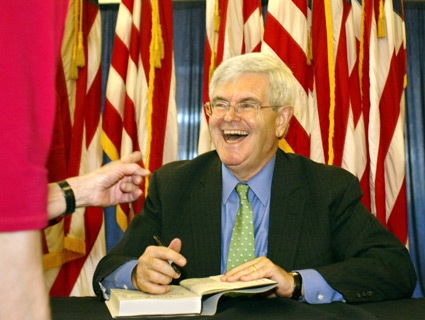 For a politician who once proposed relocating children from single-parent households to orphanages, it was not all that surprising when Newt Gingrich recently declared that, if elected president, he’d ease child labor laws to allow poor kids to work as janitors.

What’s notable, however, is the newly minted GOP presidential front-runner’s explanation. Gingrich argues that poor children lack role models who can instill in them the value of hard work—something that, say, a part-time job cleaning bathrooms could easily remedy. Making his case to an audience in Des Moines, Iowa, last week, Gingrich touted the work of an educational nonprofit he founded in the early 1990s called Earning by Learning (EBL). The program offered cash—$2 per book—to students as an incentive to read over the summer. What he failed to mention is that his group also led to a formal ethics complaint amid concerns about not just who was funding Gingrich’s program, but where that money was really going.

As Gingrich tells it, the program started that first summer in 1990 with 9 kids and ended with 30. “What happened was simple,” he said. “The ice cream truck comes by. The kid who’s in the program walks up and buys their own ice cream. Their friend says to them, ‘How come you have money?’ He goes, ‘Well, I read.’ So kids are showing up to the program saying, ‘I demand that you let me read!'”

The point of the story is that private initiatives often succeed where government programs fail. EBL was a lean, mean, private machine. “The overhead is entirely voluntary,” Gingrich said of the program in 1995. “The only money goes to the kids. So if you have $1,000 at $2 a book, you can pay for 500 books. Whereas, in the welfare state model, if you have $1,000, you pay $850 for the bureaucracy.”

But that description turned out to be false. A 1995 Mother Jones investigation revealed that the program’s all-volunteer army came at a hefty price. The group paid its Atlanta volunteers $500 each; nearly half of the total budget of the Houston branch of the program went to one salaried staff position.

A Wall Street Journal report earlier that year was even more damning, revealing that most of the money in the program’s endowment in Georgia was being kicked back to Gingrich’s friends, including Mel Steely, a former Gingrich staffer who was at the time working on an authorized biography of the House speaker. According to the paper, “90% of the $20,000 raised in the past year went to Steely and two other professors who help him evaluate the program. The children earned less than $10,000, from money leftover from prior years.”

The Los Angeles Times piled on, noting that “reading program funds were used to reimburse Steely for travel, lodging and meal expenses during three trips to attend Gingrich’s Saturday morning college course.” The overhead, in other words, was actually quite substantial.

Much of the funding came from Gingrich himself, in part because he had nowhere else to spend the proceeds of his 1995 book To Renew America. After Democrats cried foul over his decision to go on 25-city book tour hawking the book, Gingrich announced that he’d donate the receipts from the tour to Earning by Learning instead.

But EBL was also, as such charities tend to be, a magnet for activists and groups looking to curry favor with the GOP whip-turned speaker of the House. As Michelle Dally Johnson noted for MoJo, the list of donors was “heavy on conservative activists, elected officials, and party donors, but light on educators and people noted for volunteerism.” Some of them were also donors to GOPAC, Gingrich’s political action committee, which was itself the subject of multiple ethics investigations. The Houston Automobile Dealers Association, which helped sponsor that city’s EBL affiliate, admitted that the relationship gave them more access to Gingrich; the group’s president was later invited to testify before Congress about the luxury tax.

It was that overlap between political activism and private enterprise that ultimately led Rep. George Miller (D-Calif.) to formally request an ethics investigation into Gingrich and Earning by Learning in 1996.

House rules prohibit members from using their Congressional resources (such as office space) for personal endeavors. In 2010, for instance, Rep. Charlie Rangel (D-N.Y.) was censured by his colleagues for, among other things, using official House stationary to solicit funds for City College of New York, which was naming its school of public policy after him. Miller, at the behest of Ralph Nader’s Congressional Accountability Project, alleged that Gingrich had violated those standards through Earning by Learning.

The case concerned Donald Jones, a Wisconsin-based telecommunications entrepreneur—and a major donor to Gingrich’s political action committee—whom Gingrich had invited to work out of his congressional office three days a week in a voluntary capacity (through Gingrich, he’d even received a Congressional ID badge). Jones was there to help work out the wording of the major telecommunications bill that was signed into law the next year.

But Gingrich’s somewhat contradictory excuse, as explained to the Atlanta Journal-Constitution, was that Jones wasn’t working on telecommunications—he was in Washington on behalf of the speaker’s Earning by Learning program, for which he served as the president of the Wisconsin chapter. (His telecommunications company, US Cyber, provided the 800 number for EBL, which Gingrich helpfully plugged in floor speeches.) According to Gingrich, “95 percent” of Jones’ time at the Capitol was devoted to Earning by Learning.

But that explanation was also problematic. As the Congressional Accountability Project noted, “Earning By Learning is a non-profit organization with no official ties to the United States House of Representatives.” Granting office space and official resources would therefore violate House rules. Either Gingrich was using his education nonprofit as cover to allow a top donor to draft legislation directly affecting his own company, or he was using official resources to help out his private endeavor.

With Rep. Nancy Johnson (R-Conn.), a Gingrich ally, in charge of the House ethics committee, the speaker got off with a slap on the wrist, in the form of a formal “letter of admonition” and no further sanctions.

But the controversy over Gingrich’s Earning by Learning program spoke to the larger issues at play in Gingrich’s dealings. Jones, in his role as an informal adviser, donor, and volunteer at EBL, was illustrative of just how interconnected Gingrich’s private and public ventures, collectively known as “Newt Inc.,” really were. (In another, related instance, Gingrich transferred money from a scholarship program an ally had set up for inner-city students*, known as the Abraham Lincoln Opportunity Fund, to his political action committee, GOPAC.)

As he pursues the GOP nomination, Gingrich’s problem won’t be to convince voters that Earning by Learning is a model for America. Conservatives already buy his argument that the welfare state erodes work ethic. His larger problem will be in convincing voters that, given his long rap sheet of ethics complaints and allegations of crony capitalism, Earning by Learning won’t in fact be a model for how he runs his administration.

*Correction: This article originally stated that Gingrich had founded the Abraham Lincoln Opportunity Foundation; the organization was founded by a Gingrich ally.