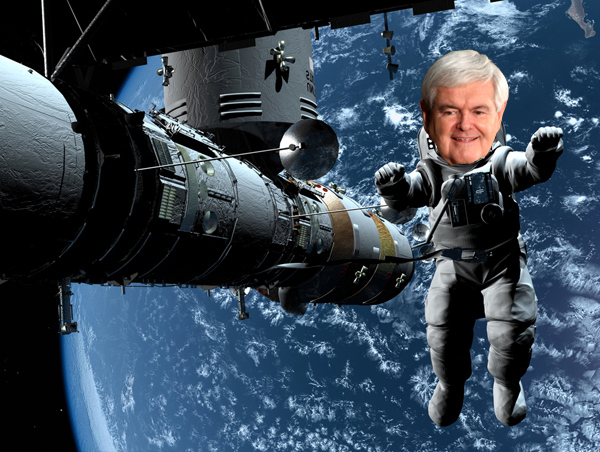 Courtesy of Shutterstock; Gage Skidmore/Wikimedia CommonsNewt Gingrich launched a Twitter frenzy on Wednesday when he delivered a major policy address on space at a Holiday Inn in Cocoa, Florida. Gingrich promised to complete a manned lunar colony on the moon by the end of his second term—January 2021—and set side aside 10 percent of NASA’s budget for prizes that would encourage entrepreneurs and inventors to experiment on their own. It’s a side of Gingrich we’ve seen flashes of on the campaign trail, but now he’s boldly going where he’s never gone before—or at least not in a long, long time.

Before he was a presidential candidate, extraordinarily well-compensated historian, speaker of the House, or really anyone of importance in Washington, DC, Gingrich was totally obsessed with space travel. He sponsored the Fundamental Space Act of 1984, which offered a path to statehood for future space colonies (the bill died in committee). That same year, he authored his first book, Window of Opportunity, to put forth his thoughts on how best to conquer the final frontier. (The cover features a giant bald eagle flapping its wings over the planet.) As sci-fi author Jerry Pournelle put it in the introduction: “It’s raining soup and Newt Gingrich has the blueprints for soup bowls.”

Pick up your spoons. Here are some of the best, or at least wildest, ideas contained within those pages. All quotes are from Window of Opportunity, unless otherwise noted:

We should have had a New York Times Moon bureau by now. Or at least a few underfed stringers: “If we had developed at a reasonable pace from 1969, today we would have eight to twelve space shuttles, two manned space stations, and a permanently operating lunar base. Each news magazine would have a section devoted to the week’s news from space.”

Send a team of astronauts to go to Halley’s Comet. “Projects like visiting Halley’s Comet could be easily undertaken by a program whose strength and sophistication would be unchallenged.” Basically, Gingrich anticipated the plot of Deep Impact.

Cut food stamp budget to buy space shuttles. “Food stamps crowded out space shuttles; energy assistance crowded out a solar power satellite project that would have provided energy for all; more bureaucracy in Health and Human Services shoved aside a permanently-manned space station; the vision of a malaise-dominated decaying Western culture smothered the dream of a permanently-manned station.” Besides, who really needs food stamps when the moon is made of cheese?

Cut farm subsidies; send farmers to space. Ok, this one wasn’t in his book but it’s too good to omit. In 1986, he told the World Science Fiction Convention: “If we’d spent as much on space as we’ve spent on farm programs, we could have taken all the extra farmers and put them on space stations working for a living in orbiting factories.” Somehow that subject didn’t come up in Iowa.

Pay your taxes; win a trip to space. “The shuttle is already comfortable enough to carry anyone free of severe health problems into space, and the next generation shuttle will be even more like an airliner. We should begin with a candidate-selection lottery based on individual income tax forms and offer to send each year’s winner on a shuttle flight.” Not to be confused with the equally appealing option of sending our candidates into space.

Create man-made climate change, using mirrors. “The climate group at the Woods Hole conference suggested that a large array of mirrors could affect the Earth’s climate by increasing the amount of sunlight received by particular areas, citing recent feasibility studies exploring the possibilities of preventing frosts in Florida or enabling farmers in high altitudes to plant their wheat earlier.”

And fight crime. “Ambient light covering entire areas could reduce the current danger of criminals lurking in darkness. Mirrors could be arranged to light given metropolitan areas only during particular periods, so there could be darkness late at night for sleeping.”

Mine the moon. “The moon is an enormous natural resource, possessed of more than enough minerals and materials to provide everything a self-replicating system needs. Structural glass and ceramics can be made by crushing rocks and molding them by hand; oxygen and water can be manufactured from the Moon’s soil to form life-support systems for humans.” And unobtanium. Don’t forget unobtanium.

Self-replicating robots in space. “At the present there is a fight between the planetary scientists who debunk a manned station and the manned-space advocates who debunk robots. Both sides miss the point. We want both people and machines in space, in large numbers, as rapidly as possible.” The theory of the Earth’s demise in which self-replicating robots self-replicate ad infitum and consume all matter on earth is called “Grey Goo.” You’ll want to know that.

Huh? “Congressman Bob Walker of Pennsylvania has been exploring the possible benefits of weightlessness to people currently restricted to wheelchairs.”

Peace in our time. “The welfare state could have reached out to our allies and to the Third World and built a cooperative venture that would have knit all freedom-loving people together in building a better future for all mankind—it decided not to. Today we stand on the verge of a moment of the movement of a ‘Unified Free World Alliance’ into space.”