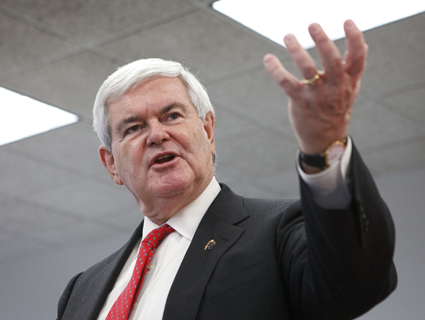 Newt Gingrich hates bureaucracies. He loathes them, really—wants to watch ’em burn and see them replaced with a “conservative opportunity society” in which the government gets out of the way to allow private businesses to (for example) extract minerals from the moon. But there’s one European bureaucracy Gingrich believes the United States could learn from: The German military, which the Georgia firebrand used as a model for how to manage the House Republican caucus. As Vanity Fair reported in 1994:

Gingrich’s pal Stephen Hanser says that part of Newt’s strategy in the House is based on combat theory, namely the German armed-forces doctrine of Auftragstaktik, or “mission orders.” The problem is that in the heat of battle subtleties are lost. Standards fall. Atrocities are forgiven. Especially if the action is rapid-fire.

Connie Bruck offered some more context in the New Yorker:

Since his earliest years in Congress (he was first elected in 1978) he has lived by what he calls a “planning model”—which entails vision, strategies, projects, tactics. It is adapted from the German military model, having been introduced to Gingrich in the mid-seventies by his close friend and advisor Steven Hanser, who was a fellow history professor at West Georgia College and is a specialist on the Wehrmacht (the German armed forces).

Gingrich’s love for the German language wasn’t just a passing phase. In blurbing Rep. Steve Israel’s 2007 collection of military speeches, Charge!, Gingrich wrote: “Steve Israel possesses that rare quality that the nineteenth-century German Army called ‘fingerspitzengefuhl,” which he defined as “a fingertip sense for the art of war.”