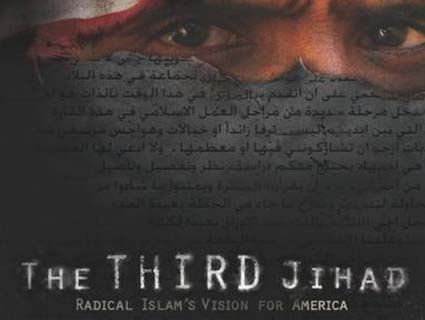 The New York Police Department, currently facing criticism from Muslim and civil liberties groups over a CIA-advised program that involved “mapping” the city’s Muslim enclaves, showed an anti-Muslim training video to thousands of officers, the New York Times reports. The film purports to describe the centuries-long process by which Muslims are seeking to dominate the planet, and in particular the United States, by covertly subverting the Constitution and implementing Taliban-style Islamic law.

The story was first broken by the Village Voice, but the Times‘ piece connects the film, The Third Jihad, and its shadowy sponsor, The Clarion Fund, to the 2012 election:

The 72-minute film was financed by the Clarion Fund, a nonprofit group whose board includes a former Central Intelligence Agency official and a deputy defense secretary for President Ronald Reagan. Its previous documentary attacking Muslims’ “war on the West” attracted support from the casino magnate Sheldon Adelson, a major supporter of Israel who has helped reshape the Republican presidential primary by pouring millions of dollars into a so-called super PAC that backs Newt Gingrich.

Adelson’s donation to Gingrich likely has something to do with their shared anti-Palestinian views, namely the notion that Palestinian national identity is “invented.”

However, Gingrich isn’t the only candidate with links to the Clarion Fund, who as Salon‘s Justin Elliott and The Atlantic‘s Jeffrey Goldberg have written, is also tied to a radical Israeli settler group. One of Mitt Romney’s Middle East advisers, Walid Phares, who spent much of the Lebanese civil war as a political and ideological adviser to the leadership of a Christian militant group that committed atrocities, remains on Clarion’s adisory board. The aforementioned former deputy defense secretary is birther Frank Gaffney, who also sits on Clarion’s advisory board and recently praised Gingrich for saying he wouldn’t appoint a Muslim to his cabinet unless he or she promised not to try and “impose [Shariah] on the rest of us.”

While Gingrich’s formal ties to the million-dollar Islamophobia industry are stronger than Romney’s, and Gingrich himself has endorsed the whole “stealth jihad” conspiracy theory, the former Massachussetts governor has nevertheless made an effort to quietly acknowledge those who believe American Muslims are quietly working to replace the Constitution with Taliban-style Islamic law (and force all of us to eat halal turkeys at Thanksgiving) by picking one of their more scholarly cohorts as an adviser on the Middle East.