The pro-Romney super-PAC Restore Our Future, run by a trio of former Romney aides, is out with a new attack on flailing GOP presidential hopeful Newt Gingrich.

The super-PAC’s “factual comparison” (its own description) attempts to show how Gingrich, the former House speaker, “has so much in common” with President Obama, and that the two men repeatedly “have stood on the wrong sides of issues,” in the words of Restore Our Future treasurer Charles Spies. The ad will appear on Monday in the New Hampshire Union Leader and The State newspaper in Columbia, South Carolina—prominent publications in states hosting the next two presidential primaries.

Restore Our Future spent $4.6 million on advertising in Iowa, most of it attacking Gingrich, who had briefly climbed in the polls. The ads pulled no punches, and almost immediately Gingrich’s support crumbled in the Hawkeye State. He ended up finishing a distant fourth in Iowa’s GOP caucuses; Romney won by eight votes. Gingrich has lashed out at Romney for the barrage of negative ads lobbed by Restore Our Future. Earlier this week, he called Romney a “liar” for saying he knew nothing about the attack ads, and, on the evening of the primary, Gingrich strongly implied that his campaign was about to go scorched earth on Team Romney. This surely isn’t going to help. 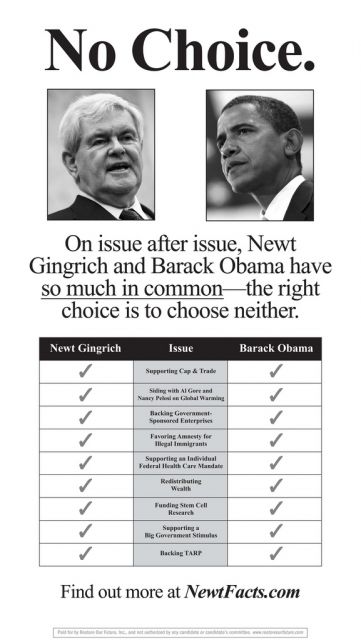