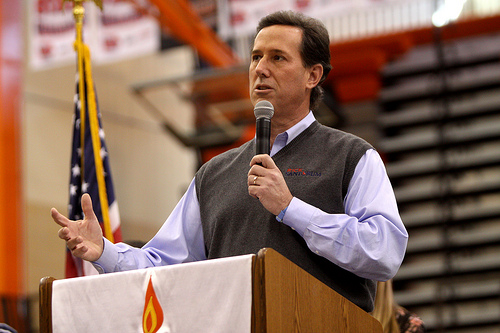 Rick Santorum loathes the liberal judges of the Ninth Circuit, the federal appeals court that stretches from Alaska to California to Arizona. In small-town New Hampshire on Thursday, Santorum unveiled his plan for ending those judges’ “reign of terror”: Ship ’em all to Guam.

Santorum was full of spicy quips on Thursday at an old train station in the town of Northfield. Riding high from his impressive second place finish in Iowa’s caucuses, Santorum held court before a standing-room-only crowd here, with almost as many journalists as voting-age New Hampshire citizens in attendance. He veered from issue to issue, from the evil of President Obama’s Affordable Care Act to tax policy under Ronald Reagan, reforming Social Security to the 2009 Honduran coup.

On the Ninth Circuit, a favorite punching bag for conservatives, Santorum said he supported its abolishment—”What the Congress creates, it can uncreate”—or at least tossing out its most liberal judges and replacing them with new ones. He acknowledged there might be some Constitutional problems with just firing the Ninth’s judges. His solution: “Maybe we can create a court that puts them in Guam or something like that,” a jab that earned him more than a few laughs.

The Ninth Circuit wasn’t the only court Santorum blasted. He singled out the Supreme Court—at least its more liberal justices—for plenty of criticism, calling the high court an out-of-control “super-legislature.” “Five people who are not accountable to the people should not be able to amend the Constitution,” he said.

Like any good conservative, Santorum paid his respects to Ronald Reagan. In Northfield, though, the tax increases presided over by Reagan came up, in particular the Gipper’s payroll tax hike passed in 1983. Santorum winced at this. “I love Reagan,” he said. “He got snookered in ’83.”

And in attacking Obama’s foreign policy record, Santorum ripped the president for calling the 2009 change-over in power that ousted Honduran President Manuel Zelaya a coup. In doing so, Santorum said, Obama took his place alongside two other leaders: Fidel Castro and Hugo Chavez. “How many times do you want to hear America in the same sentence as a group of three countries that’s Cuba, Venezuela, and the United States?”

Yet what earned Santorum the most applause was not his attacks on liberal judges or foreign policy but on Obama’s Affordable Care Act. Santorum pledged to make repealing health care reform his first act if elected president, vowing to replace it with a free-market system built “from the bottom up.”

Nearly two hours had passed since Santorum strode into the old train station surrounded by a crush of cameras and reporters. Now, Santorum said it was time to get moving again. “I’d love to stay and answer more questions,” he said, “but there’s miles to go before I sleep.”