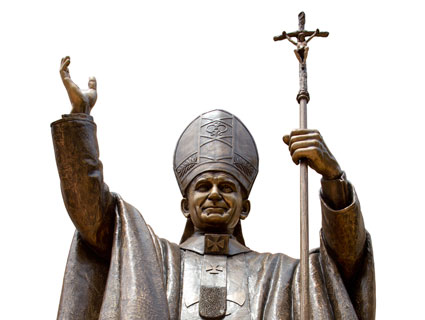 The US Conference of Catholic Bishops, the national political lobby for the Catholic Church in America, has been waging war on President Barack Obama’s new rule requiring health insurers to cover birth control at no cost to women. The religious exemption in the Obama rule allows churches an exemption to birth control coverage, but still requires religiously affiliated schools and hospitals to provide insurance to their employees that includes contraception without a co-payment.

The bishops claim that exemption is too narrow. But they don’t just want the religious exemption widened. They want the whole policy repealed. (Never mind that most employers have been required to cover birth control for years.) This USA Today story sort of buries this fact, but at least it acknowledges it:

The White House is “all talk, no action” on moving toward compromise, said Anthony Picarello, general counsel for the U.S. Conference of Catholic Bishops. “There has been a lot of talk in the last couple days about compromise, but it sounds to us like a way to turn down the heat, to placate people without doing anything in particular,” Picarello said. “We’re not going to do anything until this is fixed.”

That means removing the provision from the health care law altogether, he said, not simply changing it for Catholic employers and their insurers. He cited the problem that would create for “good Catholic business people who can’t in good conscience cooperate with this.”

“If I quit this job and opened a Taco Bell, I’d be covered by the mandate,” Picarello said.

So in short, the bishops want your Catholic boss to be able to decide whether or not you have to pay full freight for your birth control. Not coincidentally, Sen. Marco Rubio (R-Fla.) has a bill that would do just that.

The problem with this argument is that if taken to its logical extreme, your boss could claim religious exemptions for all sorts of health care issues, whether you worked at Catholic Charities, Taco Bell, or anywhere else. Christian Scientists generally don’t believe that people need pharmaceutical medicine at all. Scientologists don’t believe in psychiatry. If individual employers are allowed exemptions to the birth control coverage mandate, the law could quickly be rendered meaningless.